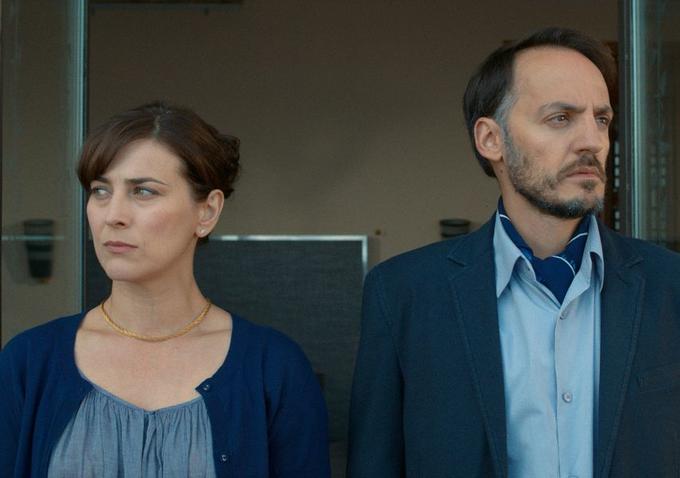 Love, the French psychoanalyst Jacques Lacan has been translated (perhaps inaccurately) as saying, involves giving something you haven’t got to someone who doesn’t exist. It might be more simply proposed that movies involve offering illusions to people who are in the dark. And the next step for a purist would be to propose that the best movies are those that concern, or at least touch on, this very fact.

I read in the New York Times that the American-French writer-director of the movie La Sapienza has worked elsewhere to revive French Baroque theater, “a style that involves actors speaking directly to their audience. The same technique is used in La Sapienza [in which] the performers have to relate to the camera, not one another”. Readers may appreciate how this can make for a disconnected movie. The actors—the husband and wife, the brother and sister—are disconnected from one another since, even when they are talking about love, or sharing their views on architecture, they are not talking to one another. And nor can viewers feel very connected to these speeches. Were we watching a play, the actors would be speaking to us, the audience, but we are not the cameras. And the lines the actors have been are given to read to the cameras are not Baroque at all, but terse, dry, simply constructed statements.

Movies offer illusions to people who are in the dark.

Of course a movie about disconnection can be hard to watch, and this not least because our lives are full of disconnections, which are hardly limited to conversations with spouses and siblings (and friends) in which we are talking past rather than to one another. The day I went to see La Sapienza I was told me of an unpleasant interaction which had begun when someone had gone to see a leader in her field and had pretended to be seeking advice when in fact she was looking for job referrals. The day after I saw the movie I heard of an elderly man who had been suffering from Alzheimer’s for several years, and his wife’s “strategy” was to not speak about it, as if what we avoid talking about must also avoid being true.

The American distributor’s synopsis of La Sapienza says the film is about a French architect who goes to Italy to complete a book about the Baroque architect Francesco Borromini. He is accompanied by his wife who feels her relationship with her husband gradually slipping away. On the shores of Lake Maggiore, they meet a pair of siblings, . . . “inner journey . . . a love story that develops . . . amid architecture, artistic inspiration, and of course emotions.”

We get much closer to the heart of the movie in the scenes where we see the husband and wife lying side by side in their dark bed, not touching, staring at the ceiling. (Toward the end of the film we find out that they haven’t really spoken or made love since their only child, born with a disability, had died.) There is a sunny scene in which the wife—who, as we later realize, has not had sex or made love in a decade—comes into the young man’s room and sits on his bed, and her breasts shimmer bra-less under her silk chemise. And that’s it; nothing transpires; she leaves the room with her shirt still on. This is paired with a later scene. The husband and the young man are staying in separate rooms of a small hotel. As they head to their rooms in the evening, the young man mentions that he sleeps with his door unlocked; the husband is welcome to come in at night and wake him. Later the husband indeed comes into the room, and he looks at the young man sleeping shirtless and then goes out.

As I left the theater the disconnection that was most intriguing me had to do with language. There are many scenes in which the wife is speaking French with the young Italian sister, who is bedridden on account of what a Freudian could term an hysterical illness related to incestuous desires. Ostensibly, one of the purer joys of this girl’s life is learning French, but this possibility is belied by the fact that her French, though simple, is flawless. This seemed to me a missed opportunity. How much more fun to have explored the errors or Italianisms in such a girl’s speech. And could this have opened the door on delicious or profound misunderstandings between the two women, or between the brother and the “French architect,” who was speaking to him in Italian?

How often do our own bee dances lead to places not so sweet?

It turns out that I had the tip of an iceberg by the horns. It didn’t take much Googling to discover that the writer-director, Eugène Green, had been born in Brooklyn without the accent grave: Eugene Green. And the French architect was played by the actor Fabrizio Rongione, born in Brussels to an Italian mother. In the movie the young man remarks that, for a Frenchman, Fabrizio (or his character, Alexandre Schmidt) speaks Italian very well. Indeed, it is his mother tongue!

Even better, I have read that Christelle Prot (Landman), the actress playing the wife, is also, in some “real life,” a Lacanian analyst. This discovered, I was reminded of Lacan’s argument that the dances of bees are not (human) language because the dances cannot be misunderstood (by the bees). Nor, I will add, can bees (or bees as we imagine them) lie. They never trick their fellow bees into flying north when the nectar is to the south. But human language is rooted in misrepresenting and misunderstanding (and thus in disconnections). Night after night in nightclubs around the world people do their dances, and how often do these dances lead to places not so sweet? Indeed the dancers may have only been pretending, and to themselves first and foremost, that honey was what all the dancing was about.

Disconnected, you might say, in the midst of these reflections and research I did not recall for a minute my unfulfilled incestuous desires for one of my sisters. (And I would add that I assume that incest taboos exist to block a desire of humans to connect to those closest to them.) Nor did I recall the conversation I had been having over dinner just before seeing the movie. My father and I used to go on long drives—several days long—to and from our summer house, and, as I was telling my companion, during all this time, it seems (in my memory), we never spoke. I poured coffee for my father and looked out the window. He drove. One time—the only words I remember—he remarked that the country music that I was playing on the radio was “cornball.” (I.e., mawkish and unsophisticated, but what he was really trying to say was, “I’d prefer the radio off.”) As life imitates life, decades later I found myself on weekends driving back and forth to a country house with a wife (my wife) who, wishing to avoid conversation, would routinely sleep through the whole trip. Instead of canned love songs, I would try to tune in a ball game.

Disconnections are not our only challenge, but they are challenge enough.

The noun la sapienza is steeped in theology, the Trinity, and the Catholic Church, but it may be quickly translated “divine wisdom.” Of course, being about disconnection, the movie La Sapienza seems to contain nothing resembling such wisdom. Except for the following line. Near the end of the film it is delivered by the writer-director himself, who, in a cameo role, plays an aged Chaldean refugee washed up on the shores of il Lago Maggiore.

I can’t help pausing to note that Chaldean is a near dead language and that this so-called “bigger lake” is not quite the biggest, either in surface area or depth, of the Italian pre-Alpine lakes. In any case, what Eugène the Chaldean—ostensibly speaking to the wife, but in fact to a camera and through it to us—says is: « Etre né est une charge lourde. Il faut de la force pour aller jusqu’au bout. » Being born is a heavy load. It takes a good deal of strength to get all the way to the end. Of course disconnections are not our only challenge, but they are challenge enough.

The top image is a still from La Sapienza. Does this image seem connected to Grant Wood’s famous painting American Gothic (here at right)? The second image above features the actress Arianna Nastro, who plays the girl in Green’s film, but this still is from another movie: La solitude des nombres premiers (The Solitude of Prime Numbers), which was directed by Saverio Costanzo.

The Lacan line about love is as offered in Adam Phillips, “On Love.” In On Flirtation

(Seuil, 2011), I have subsequently found : « L’amour c’est donner ce que l’on n’a pas à quelqu’un qui n’en veut pas. » (Love is giving something you don’t have to someone who doesn’t want it.) English edition, translation by Gregory Elliott: Lacan: In Spite Of Everything

The actor Fabrizio Rongione is best known to movie viewers for his work with the Dardenne brothers. See my, connected to disconnection, notes about their Deux jours, une nuit (Two Days, One Night).

Disconnections in movies have long been a theme of mine. See:

Divine Wisdom (and of course emotions)