I was startled to read in yesterday’s Boston Globe that a scholarly paper on “the God particle” (the Higgs boson) had 5,154 authors. I wondered if they hired a stadium for the signing and celebration.

I usually think of science as dancing with poetry. An odd couple, you’ll say, but I’ve learned from Thoreau that they don’t have to stay off the dance floor, or only glower at each other. But here, in this headline about the “God particle,” I realized the stage  was set differently. Science wasn’t glowering at poetry (or vice versa) but one half of science was glowering at its other half.

There is a big split within science, so it appears, between Big Science and others — let’s call them outsiders.

The outsiders are those who feature science as an individual, creative pursuit. Any article signed by 5,154 authors can’t honor individual pursuit.

Minds are individual, not collectives, after all. The idea of 5,000 minds authoring a single paper is rather like 5,000 architects designing the ceiling of Chartres Cathedral. There were 5,000 workers over time at that beautiful site in Southern France but not 5,000 creative geniuses (or would-be geniuses).

So I circle back to the dance between poetry — or more broadly, art — and science now from a different angle. If we look at the contrast between Big and little Art, we might just learn something about the present antagonism between Big Science and its outsiders. We’ll need a very wide-angle lens with historical depth, and then produce focused examples and questions. 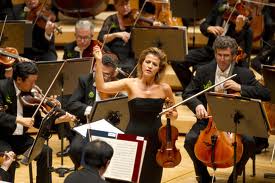 Whether it’s Chartres Cathedral or the article on “the God particle,” the lion’s share of the work has to be done by relatively anonymous workers who may never meet even 10% of their co-workers in person.

If this is how science proceeds these days, the solitary explorer who ventures into the woods or into her lab or study alone is a displaced person, a ghost from a different era.  We shouldn’t hope for a future Darwin, Marx, or Einstein; they were old-school soloists..

But who gets the Nobel Prize for uncovering a new attribute of “the God particle”? We need such prizes, don’t we? Do they have a lottery to decide of the 5,154 who will stand in the spotlights?

We should be happy for Big Science. But not every one is. It turns out that even within legitimate science, Big Science has its resentful detractors.

The fact that there were 5,124 authors of the Higgs boson scholarly paper surfaced, in my reading, in the midst of a long article on something else.

The article was not on “the God particle” or physics. It was reporting a storm of resentments against the head of a microbiology lab devoted to mapping the fine-structure of DNA.

One critic complained that the lab’s  director (Eric Lander, by name) became a symbol of plowing lots of resources into industrialized, mindless science that could be run by machines and technicians and so wasn’t real biology.

Real biology, given this outsider’s view, is done solo by the Darwins. Or perhaps it’s done by a trio, as in Watson, Franklin, and Crick of the famous double helix. Three architects could design Chartres, but could 5,000?

Actually, the resentment is not just a prejudice against mass-produced science. Plowing lots of resources into industrialized projects means less money for the stand-alones, the outsiders, the creative academic researchers who don’t join up.

Two newly minted PhD’s with roughly the same talent in molecular biology can have two different career paths: one working at the university level for a professor’s salary; the other working for a prestigious research facility for 2 or 3 times that salary. Even if big universities encourage sharing projects with non-academic institutes, why not follow the higher salary exclusively?

Sticking with money, to make matters worse, institutions can patent discoveries and rake in giant profits (as in the drug industry — another home for chemists and biologists).  The “industrialized, mindless” scientists become inordinately wealthy. This feeds resentment from within what should be a scholarly brotherhood.

I have to say I find the romantic image of poet-like thinker creatively at work much more appealing than the image of an anonymous technician doing blood tests in the lab. 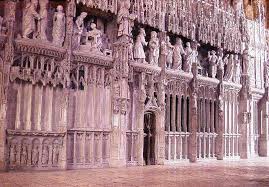 But then, it turns out that Renaissance painters often had grunts doing the work for which the master would take credit. And in a symphony orchestra the conductor takes credit for the obedient work of the players. Are Symphonies Big Music, and its players “mindless and industrialized”?

Let’s say orchestra workers are artists. Perhaps the thousands of workers who raised Chartres Cathedral are artists too. Why not grant that industrialized scientists are

I’m seeing just the tip of the iceberg here. How do I gauge the creativity that goes into science or art, at whatever level of proficiency?

If I have an animus against industrialized art, say against the output of the advertising industry, at what point does industrialized science become schlock? When it boosts the profits of drug companies? How can universities balance the need to nurture scholars who go solo against the financial payoff of collaboration with Big Science? 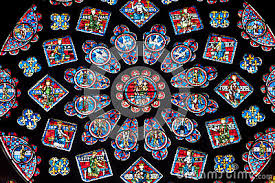 Have I dismissed too quickly the value of collective innovation — say in the design of cities like Venice, or in the windows of Chartres? The collectives would be Big Art.

Did the opening for the Chinese Olympics feature creative artistic performers? Fourteen thousand Chinese appeared during the impressive and beautiful Opening Ceremony.

And there’s an existential question, each must answer on their own: How far can I let the work I do — poetic, artistic, scientific, social — become its own reward?

Credits: The Globe cites “Why Eric Lander morphed from science god to punching bag,” in STAT: reporting from the frontiers of health and medicine, Sharon Begley January 25, 2016.  Google Images: the first two are from the Chinese Olympics and a Chartres ceiling; then we have an unidentified orchestra and two images of industry, subjects unidentified; then, Chartres (an interior), an unidentified orchestra, and Chartres, rose window. As the caption makes clear  the image to the right is from the Chinese Olympics, again. (I’d welcome help with reading the Chartres images.)