Iran and the US have finally reached a deal to limit Iran’s potential to develop nuclear weapons, in return for the US lifting economic sanctions against Iran. The deal includes constant video surveillance of Iran’s nuclear facilities, similar to that in the UN brokered peace treaty ending the 1996-2006 Maoist insurgency in Nepal.

Skeptics of the US-Iran deal might point to the failure to demilitarize Germany after the 1919 Treaty of Versailles. There are, however, at least two key differences between the recent US-Iran nuclear deal and the Treaty of Versailles: the monitoring and enforcement mechanisms. The Allied powers of WWI did not possess the technical capacity to effectively monitor all of Germany’s potential munitions manufacturing sites, nor were they unquestionably stronger than Germany. The US has the ability to ensure that Iran lives up to its end of the bargain by combining adequate monitoring technology with a nuclear arsenal that can incinerate Iran in a matter of minutes. 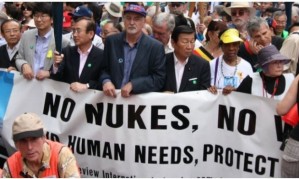 The US’ nuclear capacity, however, begs the politically uncomfortable question of why the US is not being held to the same standard as Iran. The justification for completely demilitarizing Germany after WWI was that it was “[i]n order to render possible the initiation of a general limitation of the armaments of all nations…” The major legal and political justification for limiting Iran’s nuclear program to energy production, meanwhile, is Iran’s adherence to the Nuclear Non-Proliferation Treaty, which also harbors the grand ambition of global nuclear disarmament. Poll after poll indicates that the majority of humanity, including even the citizens of nuclear armed states, share this ambition for global nuclear disarmament.

The obvious answer to the prior rhetorical question (why is the US not held to the same standard as Iran?) is that while the technical capacity to monitor and disarm the world’s 9 nuclear powers exists, no power greater than these 9 nuclear armed states currently exists to enforce global disarmament.

History has shown, however, that a greater power does exist, albeit fleetingly. The people of France, India, Iran, East Germany, Nepal, Tunisia, and Egypt (twice), have amassed and largely non-violently defeated their nations’ militaries and dissolved their ruling governments. The tragedy of these revolutions, of course, has been their replacing one undemocratic, military government with yet another. Like classic Greek tragedies, the outcomes of these revolutions may have been unavoidable in a world without the technical capacity for global munitions monitoring and mass, democratic participation in global governance. In the 21st century, however, the only impediment to global disarmament is the lack of a mass movement to manifest it.

If Iran is to be trusted to live up to its end of the bargain, the other signatories to the Nuclear Non-Proliferation Treaty–in particular, the world’s 9 nuclear powers–should be made to live up to their end. If the majority of humans are to have their wishes for nuclear disarmament fulfilled, they have only themselves to look to for help.