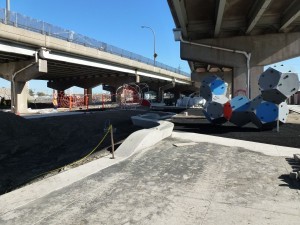 A man seen on a Sunday—a very hot and humid Sunday. He’s slight, middle-aged, not quite shabbily dressed. He’s standing under a highway underpass, one of the hundreds if not thousands of highway underpasses in Connecticut. (And may I say, too, that Connecticut is one of the worst states to try to drive through. Suburban sprawl, highway-widening projects. In North Carolina some political figure came up with the horrible idea that highways should keep being built until every North Carolinian’s home was no more than a few miles from a highway. Connecticut—like LA, Long Island, and many other places?—is on its way to being entirely paved. Home will be wherever you find yourself stuck in traffic.)

But on this hot day a man is standing under an underpass holding a cardboard sign, and the sign says, “His name is Jesus.”

I am not a believer, but still I found beauty in this man’s act, in its simplicity and humility. He was “testifying” in the Christian sense of the word, of bearing witness. Like John the Baptist, he was bearing “witness of the Light, that all men through him might believe.”

I would not swamp the man’s testimony in a long exegesis. Just these notes. We live now in a time when, it is said, more people write poetry than read it. And people going through trying divorces start blogs to report their struggles to a disinterested world. In Quaker meeting (when I used to go), people, when they felt moved, would stand and speak, and it was a strict if unwritten rule that the rest of us were not to respond to or answer what had been said. We might listen quietly; we might not listen at all. We might at some later moment ourselves feel moved to stand and speak.

There is no minister in a Quaker meeting. When God’s light and word come into the room and into a person, words may be spoken. And, unlike the God of the Old Testament, this God is not about conversation or arguing. That people testify does not deny the possibility that one of God’s most Godlike qualities may lie in having very little, or indeed nothing, to say.

A man seen on a baseball field, “Citi Field” (name=advertising, or advertising=name) in New York. He is playing shortstop for the New York Mets. He is crying. This, too, is beautiful—and painful, too; the young man is in pain. And yet this is also one of the most sublime moments in the history of sports. Sublime because so unexpected, so inappropriate, so human in the middle of the blaring plasticity that is contemporary sports entertainment.

The young man, from Venezuela, had, on his sixteenth birthday, signed to play for the Mets, and he has been playing for them, in the minor leagues and now in the majors, for eight years. This team, the players and staff he has gotten to know, this is his home. And now, in the middle of a game, he has heard from the fans and social media that he has been traded to another team, in the middle of the United States. It turns out later that the news is not true; he has not been traded. But he does not know this. He has no way of knowing this.

When he goes up to bat, the fans give him a standing ovation, saluting him “for his years of service,” as the Times later put it. When he goes back out on the field to start the next inning, he is overcome.

Wilmer Flores, the shortstop, was also a human being. And a human being who turns out to have a courage that is increasingly rare: to not be afraid to bear witness of what it feels like to be a human being.

I close with the last verse, minus the last line, from the Irish poet and playwright Louis MacNeice’s Prayer before birth. (For proper line indentation follow link to online copy of the poem or to pdf below.)

I am not yet born; O fill me
With strength against those who would freeze my
humanity, would dragoon me into a lethal automaton,
would make me a cog in a machine, a thing with
one face, a thing, and against all those
who would dissipate my entirety, would
blow me like thistledown hither and
thither or hither and thither
like water held in the
hands would spill me
Let them not make me a stone and let them not spill me.

Images: First is of a highway underpass in Toronto, Canada. From a ZDNet article: Toronto builds the biggest park in Canadian highway history: Toronto is finally taking action against the downtown highway that blocks access to the waterfront. The Underpass Park opens this summer, but will anyone want to play there? By Sonya James, March 28, 2012. Second, of Wilmer Flores, found in CBSsports.com article: Flores remains in game, fights through tears, isn’t traded after all, by Matt Snyder, July 29, 2015. Third, of Louis MacNeice (1907-63), appeared in a London Sunday Times “Poet’s Corner” article that reprints MacNeice’s “The Sunlight on the Garden.” Article by David Mills, July 1, 2012. I previously quoted one of the lines from “Prayer before birth” in a piece on the Kiki Smith sculpture (“Pee Body”) pictured here. (In which sculpture we can feel both the sculptor and the sculpted testifying.) The image of the sculpture is from a 2011 web post related to the Pulitzer Foundation for the Arts in St. Louis, Missouri.