The typical question regarding a book, any book, is, “What’s it about?” Perhaps an equally important question is: “How does this author tell the story?”

My sophomore year of high school, I had to read a book. The class was World Civilization; the book was One Day in the Life of Ivan Denisovich, by Alexander Solzhenitsyn. The curious thing is, I loved it. Against all odds, one Sunday afternoon, this book captured my attention, word for word. I consider this book to be one of my favorites, maybe my all-time favorite, and a few days ago, I think I started to understand why. I think it’s how he tells the story: through the prism of one day. Just as the title would indicate, Solzhenitsyn gives us life in a Soviet Labor Camp by means of one prisoner’s day, from reveille to sleep. The book begins:

Reveille was sounded, as always, at 5 a.m.—a hammer pounding on a rail outside camp HQ. The ringing noise came faintly on and off through the windowpanes covered with ice more than an inch thick, and died away fast. It was cold and the warder didn’t feel like going on banging.

Solzhenitsyn gave me Ivan Denisovich’s story, from the start of his day, his awakening, to its finish, his sleep, and all the points in between, in a way that I readily understood. I, too, got up every morning, faced a day, retreated to bed at night. The differences in our lives weren’t lost on me. I had a comfortable home, lived in a temperate climate, ate good food. But the way the writer crafted the story was the simplest, yet most universal way, of telling a human story. It was something I could wrap my head around—the living of one day—and the multitude of particulars Solzhenitsyn gives us (eating watery gruel that might have a bit of fish if you were lucky, bricklaying in the Siberian cold) had me living right there with Ivan Denisovich.

The way Solzhenitsyn crafts the story shows how the largest human stories, here life in a labor camp, can be told in a small, manageable unit. In such a finite way, Solzhenitsyn gives us the infinite.

I have been thinking of other examples of writers’ telling a big story by means of small, and several stand out in my mind. One is War Horse by Michael Morpurgo. The book was written for a young audience, and it found its way to stage and screen. War Horse tells the World War One story through the point of view of Joey, a horse. The book begins:

My earliest memories are a confusion of hilly fields and dark, damp stables, and rats that scampered along the beams above my head. But I remember well enough the day of the horse sale. The terror of it stayed with me all my life.

Morpurgo takes us through the horse’s journey through World War I. Once separated from his human, Albert, on the fateful day of that horse sale, he wants only to be reunited with the boy who loved him. We live through trench warfare, witness the carnage through Joey’s eyes. It is the story of one horse, and his one human, but through the story’s structure, Michael Morpurgo gives us the horror and senselessness of war, and the disquieting truth that millions of horses died in the “Great War.” 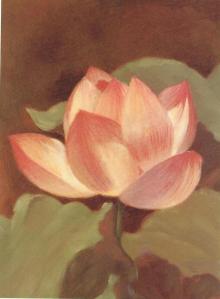 Children’s books in general are a treasure trove of large stories being told through the small, and one great example is The Lotus Seed by Sherry Garland. In this work, Sherry Garland gives us the Vietnam story through the smallest of motifs, the seed. At the beginning, a little girl sees the emperor crying. He’s lost his throne. Moved by his tears, she takes a seed—a memento of his tears—from a lotus pod in the imperial garden. The seed travels with her. We move through war, through displacement from home, to a boat, to a new land. Without her knowing, a grandson finds and plants the seed, and the girl, now a grandmother, cries. But the seed bears a flower, and more seeds, and life continues, in this new place. Through The Lotus Seed, our author gives us, in a few pages, the Vietnam story, and even bigger than that, the story of life ongoing, by means of one tiny seed.

One last, standout example is “Tag,” a chapter in Let the Great World Spin, a book for grown-ups by Colum McCann. This work sweeps broadly, as the title would suggest, but Colum McCann gives us some of life’s largest truths by means of small stories. The setting is New York City in 1974, the time of the famous tightrope walk between the Twin Towers. “Tag” celebrates a teenager, a displaced, disconnected soul, the victim of poverty and abuse by his stepfather. The chapter begins: “Catch him here, in the crook of the carriages, with the morning already ovened up and muggy.” 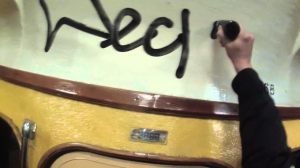 Catching him is hard, for this young man travels at high speed, trying to capture an image of someone riding atop the subway trying to achieve a tag, a spray-painted graffiti mark that memorializes his having been there. He captures these images, when he can, by means of a camera, a Minolta SR-T 102 given to him by a customer at the barber shop where he works. “Just handed it to him, case and all.”

In reading that chapter, I recall being stunned by Colum McCann’s writing, the speed of it, the energy, and the soaring way that he gives us this young man’s art. The large lesson that I drew here: the displaced, the disconnected, the hopeless, will strive to find something of beauty, and use what tools they have at their disposal to create their own art.

We have a choice, in whatever art we pursue, of how we are going to tell a story, whatever story it is we wish to tell—and be this in writing or to friends or family during a meal. The small way is sometimes the best way. Give the minds of your audience something they can manage. Then let it grow.

Joy Archer Yeager, a freelance writer living in Houston, Texas, holds a master’s of liberal studies degree from Rice, a bachelor of arts in philosophy and Spanish from the University of the South (Sewanee), and a juris doctorate from Southern Methodist University. An attorney specializing in legal writing, Joy has a husband, Doug, and two daughters, Melanie Kate and Holly. She reads and swims as much as she can.

Workers at a Siberian gulag from the Miami University College of Arts and Science, Havinghurst Center, Russian & Post-Soviet Studies.