Seemingly every statement regarding Donald Trump in recent weeks either explicitly or implicitly compares him to Hitler. It’s almost as though both social and mainstream media are trying to pay homage to Godwin’s Law, which humorously and tautologically states that any online discussion will eventually compare the subject to Nazi Germany. These comparisons highlight both the capacity and limitation of the American imagination. For these comparisons to have any meaning, however, historical facts must be addressed.

It is true that Hitler was a uniquely effective rhetorician. Perhaps Trump is too. That is why the New York Times has carried out an analysis of nearly 100,000 words uttered by Trump, including nuggets of wisdom such as, “He has a particular habit of saying “you” and “we” as he inveighs against a dangerous “them” or unnamed other…” When the Times authors point out that, “In another pattern, Mr. Trump tends to attack a person rather than an idea or a situation, like calling political opponents “stupid” (at least 30 times),” their failure to reveal how this stacks up against other candidates allows our imagination to fill in the blanks. The article is titled “95,000 words, many of them ominous, from Donald Trump’s tongue.” Does this mean that Donald Trump is being ominous? Of course it does. But does this also mean that his hate-speech is ominous? Perhaps some things are best left to the imagination of the paranoid reader. On the other hand, some things aren’t. Near the end of the article, the authors state, “according to historians, demagogues have used [self-aggrandizing rhetoric] to insist that they have unique qualities that can lead the country through turmoil.”

Hitler, however, was known for more than his public speaking. He was largely responsible for Germany’s invasions of its neighbors during WWII, and can even be held partially responsible for the actions of his competitors, including the U.S. and U.S.S.R–though the reverse of this could also be argued. Donald Trump, on the other hand, has repeatedly come out against America’s 2003 invasion of Iraq, and would have plenty of Western historical figures other than Hitler to compete with in death counts were he to become president. In short, no serious historian would argue that foreign conflicts are unique to fascism. Taken to the other extreme, of course, amateur historians will argue that all aggressive militaristic, elite governments are fascist.

Similarly, Trump’s recent comments about barring Muslims from entering the U.S. has also drawn comparisons to fascism. While not completely off base, one need not leave the borders of our great nation to find a popular leader of the 1930-40s who mobilized his military to concentrate an unpopular ethnic minority into camps. 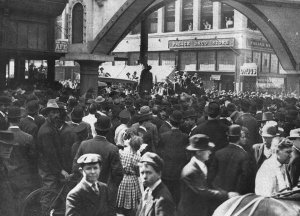 One important aspect of Nazi Germany was the lynchings of Jews. In my estimation, Americans so often overlook this factor because so few lack the historical frame of reference to even understand what a lynching is. Nearly every student of mine–as well as most activists I’ve spoken with–believe a lynching to be a murder that occurs in a public space, rather than a murder committed by The Public. The reason that most Americans do misunderstand the nature of communal violence is likely that lynchings–while systematic in the U.S. until WWI, and common through WWII–ended by the 70s.

Most Americans have likely witnessed violent, public spectacles, such as 2003’s “shock and awe” campaign in Iraq, or professional football. Witnessing such acts, however, is a far cry from carrying them out. Americans today are so much more peaceful than they were a century ago. The demand that local police broadcast footage of their killings comes not from voyeurs, but from activists who are aware that state-

violence is so widely repudiated that evidence of it will prompt people into the streets. If one absolutely must draw an analogy to Nazi Germany in every paragraph, it’s probably better to look to India, where Muslims are being lynched over allegations of beef possession, where Prime Minister Narendra Modi has been implicated in the communal slaughter of thousands of Muslims, and where the ruling BJP party is the political wing of the literally fascist Rashtriya Swayamsevak Sangh (RSS).

The lack of communal violence in the last half-century in the U.S. has not stopped media outlets from preying on our paranoid, collective subconscious, which at least knows enough about the era of communal violence to fear its return. Occupy Democrats describes the above video with language even more liberal than its politics, the headline reading, “Trump’s rally turns to riot as supporters viciously beat black protester.” The footage has clearly been shot inside the belly of a sick society, where one man can pay to rent an arena to profess things that are objectively false, whereas a man who tells the truth is considered a protester, or an interrupter, and is physically subdued by a few citizens and agents of the executive branch. Does this incident constitute communal violence though? I’d say not. Is a return to communal violence a realistic danger in the near future? Again, I’d have to disagree.

Does this distinction matter though? From a purely analytic standpoint, distinction always matters. But what about from a moral standpoint? Is it simply my Orientalism that makes me more comfortable with the thought that Donald Trump may inspire one-hundred lone wolves to commit as many hate-crimes and mass shootings than I am with the thought of Narendra Modi inspiring millions of people to kill a similar number? Why am I more disturbed by the thought that deep down inside, everybody is actually a heartless murderer, rather than the other extreme: that one barbaric individual could wipe out the species with the press of a button. Perhaps it is because one of these extremes implies hope for the species, albeit with a little luck.