By 1921, more than 200,000 African Americans had migrated to Harlem and about half of them utilized Harlem Hospital. Many of these people had come up from the South with the hope of living a better life in New York. But, among other things—and reflecting the segregation of the times—Harlem Hospital only provided health care to African Americans on certain days of the week, unless extra fees were paid. Thus, for example, an article from the New York Herald, April 4, 1921, reported:

[A]n interne is alleged to have replied [to a sick woman, Miss Heidt] that the ambulance could not be sent out because it was Sunday. The affidavit charges that on payment of $10 to the interne he called an ambulance to be sent for Mrs. Robinson, who later appealed to Miss Heidt for money to give the nurses, and obtained $15 for this purpose, saying that she could not get proper attention otherwise.

That article and others state that African American patients were overcharged for health-care services rendered by the hospital, and such excessive charges were required prior to receiving any care. Even when the fees were paid, African American patients often received poor treatment—or worse in case of bungled surgeries. Historical reports indicate that patients had needles broken in their arms, were not given X-rays when needed, were barred from certain floors and thus from certain services, and were left to die for lack of medical attention.

African Americans were not given X-rays, were barred from certain floors and services, and left to die.

Given all this, it was not surprising that African Americans only went to Harlem Hospital when they felt they had no other choice. This fact alone—the delay in their seeking medical care—put the community at greater risk of contagious diseases and put individual citizens at greater risk if they had a disease such as cancer that needed prompt attention. 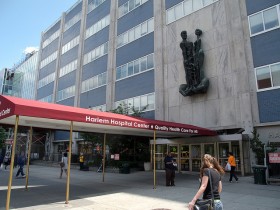 All this certainly counts as bad news, but it has led as well to good news: to the development, first at Harlem Hospital, and now continuing throughout the United States and elsewhere, of a whole new and promising field of medical services: patient navigation. A patient navigator is a member of a health-care team who helps patients “navigate” the health-care system and get timely care. Navigators help coordinate patient care; connect patients with resources such as screening, diagnosis, treatment, and supportive care; and help patients understand the health-care system and issues related to their particular illness or injury. A patient navigator’s role is to eliminate barriers, listen to a patient’s needs, and increase access to care. Patient navigation was developed in the early 1970s by Harold P. Freeman, an African American, who was for 25 years an oncologist at Harlem Hospital. [Photos of hospital and of Dr. Freeman above.]

Dr. Freeman ventured into the community to talk with people about why they weren’t making more use of the hospital.

In many forums, to include a CBS News program and a seminar which I attended, Dr. Freeman has told the story. When he started working at the hospital in the 1960s, over and over again he saw women from the community coming to the hospital too late to be saved from breast cancer—and this even though they lived within walking distance of the hospital. He began to venture out into the community to talk with people about why they weren’t making more use of the hospital. He learned that folks didn’t believe that the hospital was for them, that they couldn’t afford the services, and, quite frankly, the facility was very intimidating. Imagine a woman going into Harlem Hospital for an examination and being told “you have breast cancer,” and then having her condition described to her in medical terminology that she did not understand.

People who are uninsured are treated late in our society for very distinct reasons. They cannot get into the system until it’s too late, or often they don’t even come or try to get in because they know they can’t get through the system. When you’re uninsured you have a 10-15 percent lower 5-year survival.

In an effort to make a better connection between the people and the hospital, Freeman started a weekend clinic at Harlem Hospital and he began to identify people in the community who wanted to be helpers and leaders. The people he sought did not have to possess any particular health-care training, but they had compassion and a desire to be of service to others. Freeman would train these people to navigate Harlem Hospital and resources in the community to help get patients into the hospital earlier for treatment. This innovative approach resulted in more Harlem women who developed breast cancer coming to the hospital for treatment before their cancer had reached a late stage.

It’s been a real struggle for me to try to accomplish what I set out to accomplish, even as a young surgeon who in the late 1960s saw the problem and became frustrated. . . . I’d come to work and what I trained to do—that’s not the real answer. And that drove me to try to understand what was driving it—poverty, the main issue, but also culture and behavior mixed in. And so I set out try to change this at one hospital, in the beginning. That’s all I knew to do.

When I was in graduate school, one of my advisors referred to Freeman as the “doyen of black docs everywhere” and as one of the “grand old men of American medicine.” As a fellow African American, being in the presence of Dr. Freeman had me awestruck. I still have that feeling today, seven years after the very first seminar.

That said, I would also conclude this piece with these two further observations. First, it should be noted that at Harlem Hospital Freeman had a predecessor. The first African American physician that was hired by Harlem Hospital in 1919 was Louis Wright. He did research both on the impact of cancer on the body and on the barriers within the health-care system of those times, and this latter work led to the integration of African American health-care staff and patients at the hospital.

Patient navigation touches on a more fundamental problem: the effect of poverty and discrimination on health and health care.

Secondly, while patient navigation has been a great boon to poor people who have cancer, of course this approach only touches on one aspect of a more fundamental problem: the effect of poverty and discrimination on both health and health care. To make more progress in these areas our society needs to address more vigorously the environmental challenges of income inequality, unemployment, little or no insurance, and low levels of health literacy. Nor are they healthy, the entrenched feelings of worthlessness and hopelessness that are felt by disenfranchised people. And the feelings of alienation and distrust are passed from generation to generation. Freeman’s “patient navigation” approach was born of a spirit of innovation and community engagement, and out of a desire to make the benefits of medical science available to all. “Should poverty be an offense that is punishable by death?” Freeman asked on CBS. More Dr. Freemans are sorely needed.

“Charges of Graft, Neglect Hit Harlem Hospital,” New York Herald, April 4, 1921. This article also appears in the collection Harlem on My Mind: Cultural Capital of Black America, 1900-1968, edited by Allon Schoener; originally published in 1969 as the catalogue to the Metropolitan Museum of Art’s exhibition of the same name; reissued by The New Press in 2007.