In Dancing in the Streets: A History of Collective Joy (Holt Paperbacks, 2007), Barbara Ehrenreich writes about the evolution of carnivals; from tribal societies masking and dancing to manufacture group solidarity (Intro, Ch. 1); to feudal festivals that challenged oppressive gender and class relations (Ch. 4). Writes Ehrenreich:

Whatever social category you had been boxed into–male or female, rich or poor–carnival was a chance to escape from it. No aspect of carnival has attracted more scholarly attention than the tradition of mocking the powerful, since these customs were in some sense “political,” or at least suggestive of underlying discontent (pg. 88-9).

What makes carnival overtly political is the hostility toward festivals from authorities. Medieval law, according to Ehrenreich, seems obsessed with controlling when and where people could sing, dance, and mask (Ch. 5). These efforts, she writes, were largely successful.

The loss, to ordinary people, of so many recreations and festivities is incalculable; and we, who live in a culture almost devoid of opportunities either to “lose ourselves” in communal festivities or to distinguish ourselves in any arena outside of work, are in no position to fathom it. One young Frenchman told his reforming priest that he”could not promise to renounce dancing and abstain from the festivals… It would be impossible not to mingle and rejoice with his friends and relations.”

Growing up, in the typical short-sighted manner of a child, I largely took for granted that once a year people would take to the streets in masks and canvass strangers’ houses for candy. My main concern was the candy itself. After turning 17 or so and gaining control over my income and purchases more or less, Halloween suddenly lost its luster; mainly because I could procure candy at my leisure, and no longer depended on handouts from strangers, witches, dwarves, small business owners, etc. There was also the phenomena that didn’t appeal to me in the least, where kids my age were no longer masking and trick-or-treating, but were donning black outfits, forming gangs based on friendship cliques, and battling one another with eggs and shaving cream. By the time I had reached college, however, Halloween was suddenly cool again. 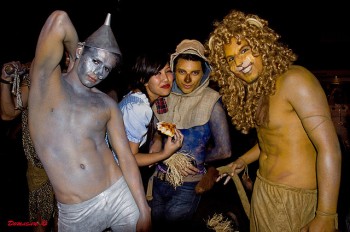 Ehrenreich claims that it was “gay culture” that recently returned Halloween to the adult sphere (pg. 258-9). This isn’t particularly surprising, considering that Halloween and the Pride Parade are two of the only avenues that exist in America today for public spectacle (alongside May Day, and Mardi Gras in New Orleans). Interestingly enough, Ehrenreich also regards the rise of spectator sports as an effort to reestablish carnival, especially considering the increasing participation of women at stadiums and tailgating parties (Ch. 11).

Halloween, however, contains all the crucial elements for public spectacle as social movement: masking, dancing, singing, sharing, taking to the streets, all under the cover of darkness. Even when I don’t feel like going out, I try to participate; if not for myself, than for the children who I hope will also grow up taking for granted that occasionally people turn society upside down.