And have you changed your life?

A while back, in Zeteo 9/20, prompted by some remarks of E. O. Wilson, I wondered about the human need for epic, perhaps a religious epic, with roots in the Darwinian saga of creation.

An epic or saga appears on a big screen. If we are concerned for the survival of the best of a religious sensibility, we might also

find a place for small-screen encounters captured in poetry of the moment.

We might work to resuscitate instances of Martin Buber’s “I/Thou” inter-animations. (I say more about Buber in my next post.) This “attention to the particular” would shelve, at least for the moment, anything as sweeping as an unfolding creation or cosmos. It would awaken to specific meaning-laden “things” that speak intimately, and bring us close to gods or a god.

Poets can enact such intimate and godly inter-animations. I’m thinking here of Rilke’s great poem on a broken Apollo — and of a less known cousin, a poem by Mary Oliver.

Rilke: The Archaic Torso of Apollo

We cannot know his legendary head
with eyes like ripening fruit.
And yet his torso is still suffused with brilliance from inside,
like a lamp, in which his gaze, now turned to low, gleams in all its power.

Otherwise the curved breast could not dazzle you so, nor could a smile run through the placid hips and thighs to that dark center where procreation flared.

Otherwise this stone would seem defaced beneath the translucent cascade of the shoulders
and would not glisten like a wild beast’s fur: would not, from all the borders of itself, burst like a star: for here there is no place that does not see you.
You must change your life.

Never will we know his legendary head
where the eyes’ apples slowly ripened.
Yet his torso glows as if his look were set above it in suspended globes that shed a street’s light down.

Otherwise the surging breast would not thus blind you, nor through the soft turn of the loins could you feel his smile pass easily  into the bright groins where the genitals yearned.

Otherwise this stone would not be so complete, from its shoulder showering body into absent feet, or seem as sleek and ripe as the pelt of a beast;

nor would that gaze be gathered up by every surface to burst out blazing like a star, for there’s no place that does not see you.
You must change your life. 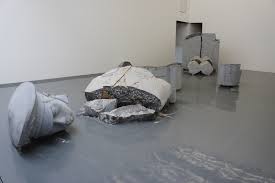 Broken gods are not broken simpliciter.  They can be radiant.

Or we might be left with a corpse, as Nietzsche suggests, or a God eclipsed, as Buber suggests. Far worse, perhaps all we have is the image to your right — an ISIS attack. A new meaning for “militant atheism.”

Beyond such despair, what if the gods, or beauty, even broken beauty, just disappear into a dumpster, and nothing calls us as a broken Apollo might: “Change your life!”

Did you too see it, drifting, all night, on the black river?
Did you see it in the morning, rising into the silvery air –
An armful of white blossoms,
A perfect commotion of silk and linen as it leaned
into the bondage of its wings; a snowbank, a bank of lilies,
Biting the air with its black beak?
Did you hear it, fluting and whistling
A shrill dark music – like the rain pelting the trees – like a waterfall
Knifing down the black ledges?  And did you see it, finally, just under the clouds –

A white cross Streaming across the sky, its feet  Like black leaves, its wings

Like the stretching light of the river?  And did you feel it, in your heart, how it pertained to everything? And have you too finally figured out what beauty is for.     And have you changed your life?

The power of beauty does not pulverize.  It preserves, gives birth, and shines.  Nearly a century apart, Rilke and Oliver make beauty have this happen.

Citations: The Mitchell translation of Rilke’s poem can be found in Ahead of all Parting: Selected Poetry and Prose of Rainer Maria Rilke, Modern Library, 1915; the William Gass translation is found in Reading Rilke, Basic Books, 1999, and discussed in my Lost Intimacy in American Thought, Continuum, 2009. Mary Oliver’s poem comes from Swan, Poems and Prose Poems, Beacon Press, 2011. And thanks, again, to Google Images.