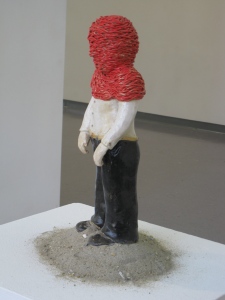 One cannot ignore or underestimate the emotional depth associated with traditional Confucian values in China, specifically in relation to the social environment and parental feelings imposed on a single daughter. Any attempt by her to break away from the conservative expectations of the traditional family unit often results in conflict. The artist Lu Zhang was born and raised in Xi’an, a major historical center in the heart of China. For her to leave this region and come to New York, even in today’s rapidly changing social environment, was a major step forward, a victory in fulfilling her desire to be an artist.

The artist Lu Zhang has completed her MFA and is studying for a Master’s in Art History at Pratt Institute, where I saw her MFA Thesis exhibition. I was struck by one of her ceramic sculptures from a group titled Keep in Touch and reached out to her for some meaning.

A man stands on a pile of sand in a tense-awkward pose of inactivity. His arms lean a little forward and his hands are slightly clenched. His head and shoulders are covered by what appears to be a woven cloth of red threads. What does a Chinese mother do when she learns that her only child is leaving for the United States to study art and forego the planned-for career in business? She knits a radiant red sweater for her daughter as a reminder of the depth of her love. For the daughter, the red sweater becomes a symbol of a love that holds one tight and restricts. The love becomes like sand—the tighter one holds the more it falls through one’s grip. While growing up in China, Zhang’s mother was her umbrella—always there to protect her. The red sweater became a physical manifestation of that umbrella in her new home and the close-knit relationship they shared. In order to become herself as an artist and create her own private space, she was compelled to symbolically destroy the sweater. She ritually cut it apart in a performance, Mother Made, in New Mexico, a place that represents to her what is a typical American landscape of mountains, trees, rocks and open spaces of desert.

With this act of desecration, Zhang found a deeper understanding about the desire to be free and the constant struggle to accept that certain conditions of control are a part of love. She did not throw away the yarn—it became a symbolic tether of support. In another sculpture, red yarn holds together two pieces of a severed leg, that stands in for her own lost knee ligaments.

Use of images courtesy of Lu Zhang.