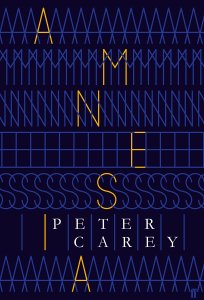 Amnesia begins with a hacker known as Angel. She releases a computer worm which opens the gates of CIA-sponsored prisons around the world. Many of these are in Australia. Some suspected terrorists manage to escape; others are shot by prison guards. Angel goes on the run. Her mother, a well-known actress, asks investigative journalist Felix Moore to write the girl’s life story. The idea is to create a wave of public sympathy for her and help her avoid extradition to the US, where she risks the death penalty.

As the plot develops, the conflict between Angel, whose real name is Gaby Baillieux, and her parents, becomes central. There is a stark contrast between the compromising Labor party hippy parents and their puritanical hactivist daughter. Gaby’s father, Sando is a Labor MP who’s worked his way up by keeping quiet at all the crucial moments. One such moment occurred in 1975, when the democratically-elected government of Labor Prime Minister, Gough Whitlam, was forced out by the unelected governor-general, with the aid of the CIA:

Of course there was a conspiracy. We are old enough to know this now. There are institutions whose task it is to conspire all day long. They spy in every corner of our lives. They employ hundreds of thousands of workers and build acres of employee parking lots. If they are inefficient they are not always ineffective.
Of course the CIA could not do it all alone. It was like a brute-force attack on a corporate website. It required muscle, persistence, even luck. It required the conservative senate to block the supply of money to the government, which was unconstitutional. It needed Mr Murdoch and his collaborators to make this seem OK, to create a bullshit crisis which could only be resolved by the governor-general, the representative of the Queen of England, who would then dismiss the people’s government. It also required the press to keep up the hysteria, to slander and criminalize an elected government, to name the process of its illegitimate removal ‘The Coup’ while insisting it was no such thing.

Gaby’s growing realization that her father and his generation have no political courage leads her deeper into direct action, creating dramatic events that will provoke a media buzz, and engaging in online subversion of the system. Unlike the Sixties generation that loved sex, drugs and rock and roll, Gaby is in love with technology. In programming she sees a way to overcome social inequalities and assert herself as a woman:

They will say there are no female programmers, she said on tape, and everything is there to make sure your gorgeous boy is on the fast track, making deep algorithms while you are likely to get yourself stuck in some fucking data centre mounting servers, changing tapes, and running cables under the floor. If you drop out of high school your workmates will be idiots trying to feel your tits, managers who want to fuck you and ‘promote’ you to marketing or customer support, on the phone all day explaining technology to morons. I almost did this to myself.

This story is politically sharp, funny and very relevant. But if conspiracy is the problem and technology is the solution, what role is there for ordinary working people in the political life of a country?