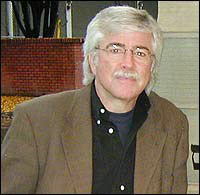 Nameless, Tennessee or Remote, Oregon or Why, Arizona or Why Not, Mississippi, anyplace and no place. Heat-Moon’s narrative is travel writing at its best: self-discovery; observations painting a portrait of the destination – its place, its culture, its personality; captivating, solemn, enthralling and charming storytelling; wonderment, tolerance and acceptance arising spontaneously along the way; humor and innocence. Above all elsewhere is Mr. Heat-Moon’s magnificent writing:

Then Darlington [SC], a town of portico and pediment, iron fences, big trees, and an old courthouse square… on the west side of [which] stood the Deluxe Cafe. The front window said AIR CONDITIONED in icy letters… and inside hung an insurance agency calendar and another for an auto parts store. Also on the walls were the Gettysburg Address, Declaration of Independence, Pledge of Allegiance, a picture of a winged Jesus ushering along two kids who belonged in a Little Rascals film, and the obligatory waterfall lithograph. The clincher: small, white, hexagonal floor tiles… I went in happy.

I expected a grandmother, wiping her hands on a gingham apron… Instead I got Brenda. Young, sullen, pink uniform, bottlecaps for eyes, handling her pad the way a cop does his citation book. The menu said all breakfasts came with grits, toast, and preserves. I ordered two eggs over easy. “Is that all you want?”  “Doesn’t it come with grits and so forth?”  “Does if you ast fort.”  “I want the complete, whole thing. Top to bottom.” She snapped the pad closed. I waited.

I was counting grains of rice in the saltshaker (this was the South), when Brenda pushed breakfast at me, the check slick with margarine and propped between slices of toast. The food was good and the sense of the place fine, but Brenda was destined for an interstate run-em-thru. Early in life she had developed the ability to make a customer wish he’d thrown up on himself rather than disturb her.

The excerpt is its own story with a decent opening line, a plot, tension, discovery, climax and a succinct and final ending. It is cogent and coherent. Its vivid descriptions, simile and metaphor, varied and rhythmic sentences, humor and spontaneity illustrate good writing – pure and simple.

William Heat Moon’s classic lends refinement and credibility to anyplace on any shelf, or elsewhere, in any travel library.