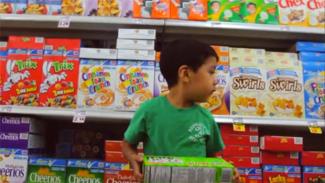 I first heard about Fed Up—a documentary about obesity in the United States—when a review by The Huffington Post made it to my news feed last week. In the article, Corinna Clendenen addresses the documentary’s stories of children’s struggles to lose weight. She is not entirely convinced about the health facts in it, but she shares concerns about the manipulative strategies of the food industry. For example, Clendenen explains:

The film takes a hard look at the post-war food industry and how it has managed to cultivate in the American palette a taste for food products that have lots of calories and little nutritional value. Fed Up reveals the indoctrinating effects of bombarding children with junk food messages through the media — television, movies, and after-market toys. With heroes like Shrek on the Twinkies box, kids learn to associate processed food products and fun from an early age. A priceless bit of footage shows Shelley Rosen of the McDonald’s Corp at a hearing testifying: “Ronald McDonald never sells to children. He informs and inspires through magic and fun.”

When Michelle Obama dug up the White House lawn to plant a vegetable garden, Coke and Pepsi stepped in. The program shifted from educating kids about eating healthier to advocating exercise.

Clendenen’s footage selection reveals exactly what is wrong with any company advertising to children. Like McDonald’s Corp, many others use “magic and fun” to sell harmful products. They may call this inspirational, but what they do is limit children’s access to healthy choices. (Who wouldn’t pick the fun box over the common apple?) When it comes to staying healthy, children’s hands are tied back. (As is effectively portrayed by Erik Ravelo’s photograph in the cover.) Clendenen elaborates on children’s struggles in the film:

One 14-year-old weighs over 400 pounds. His family tries to diet, but without much success. The teenager has a hard time giving up the foods he’s supposed to avoid when they make up the menu at the school cafeteria.

Unfortunately, this is as much a problem in the US as it is elsewhere. Children around the world are told that junk is fun and healthy is boring. Do they really have a choice, then, when they select fats and sugars? If we want them to live healthy, we need to give them a fair start.

To read more posts in the fields of children and childhood by Alexia Raynal, visit her ZiR page here. For an exploration of children’s lives between two worlds read Alexia’s article “Children Challenging Borders: The physical and psychological journeys that the children of immigrants make for their families.”

Fed Up was directed by Stephanie Soechtig and narrated by co-producer Katie Couric. It was released by Atlas Films in May 2014.

McDonald “inspires” through magic and fun