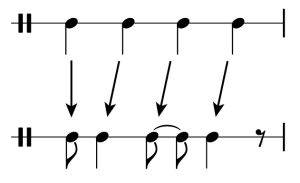 “Meter,” Paul Fussell writes, “is what results when the natural rhythmical movements of colloquial speech are heightened, organized, and regulated so that pattern—which means repetition—emerges from the relative phonetic haphazard of ordinary utterance.”

This from Poetic Meter & Poetic Form (first published in 1965), which tempers its fundamental conservatism with excellent pages on Whitman, which form part of an excellent chapter on “free verse.” I was reminded of this book and of these passages during an e-mail dialogue with a professor of Old English and Middle English poetry.

The simple point that I, after Fussell, wished to harp on with the professor was that ostensibly non-metered poetry often uses other patterns and variations to organize the text, convey meaning, and provide aesthetic pleasure. To find an illustration I went to the New Yorker poetry website, which offers tons of poems, and I grabbed, or was grabbed by, “For the Silo Boys,” by Andrew Grace, who, along with writing poetry, teaches it at Kenyon College.

Because in free verse the length of the line is determined by feel rather than established pattern, a crucial problem for the poet is knowing when to break lines. “I think very few people can manage free verse,” says Auden. “You need an infallible ear, like D.H. Lawrence, to determine where the lines should end.”

The New Yorker‘s web designers help us appreciate this observation. To frustrate pirates, I suppose, the poems are coded in such a way that if you electronically copy and paste them, the line breaks are lost. This offers students and lovers of poetry an interesting exercise: copy the block of text (the poem) into a word-processing file and then try to come up yourself with the “right” line and stanza breaks—be these the ones you think the poet would have chosen or the ones that you yourself would choose.

In the case of the “Silo Boys,” I’ve now spent a good deal of time with it, and still, re-trying, I do not come up with the same breaks as Grace did. His logic or pattern has not dovetailed with mine, and one might wonder if logic there is in this case, or in many a similar one. (I believe that most of the contemporary poems on the New Yorker site would be much like Grace’s, as regards meter and enjambment—the running of a sentence from one line into the next.)

Fussell is of great help here. He writes:

But usually the free-verse poet’s ambition is less to exhibit meter than to keep it from showing. He has numerous other methods for reinforcing sense, methods resembling those by which a writer in traditional meter “syncopates” by executing significant variations on established patterns. One way the free-verse practitioner can exploit the device of varying from a norm is to offer a long line against a preceding grid of short ones, or a short line after we’ve got accustomed to long ones.

Fussell has in mind Whitman’s approach, but the concept can be applied to other kind of variations from other kinds of norms.

So here then is Grace’s poem, “For the Silo Boys”:

When the corn gave,
a boy was sucked to the bottom
of the cement silo whose walls
he was paid almost nothing
to scrape clean with a steel pole.
It took thirty-five men to pull his body
from the outlet spout.

Corn had plugged his nostrils,
ears, and throat as far down
as his lungs. In the calf barn,
rescuers cleared the field
of his face, a few fistfuls of grain
a calf sluggishly ate
on its way out to pasture.

In the Iliad, the moment
Dolon, young, ugly, volunteered
to spy on the Argives
when no one else would, he was doomed
to have his weasel cap stripped
while his head rolled into a trench
darkened with other sons’ blood

where his mouth would slowly fill
with blades of grass.

We might wish to say that “Silo Boys” is a poem in looks only; otherwise it is a gruesome incident described with colloquial speech and the help of a literary reference. (And we might say quickly that, unlike Dolon in The Iliad, the corn-choked “silo boy” did not volunteer for treachery, and may not have even known that he was volunteering for dangerous duty.)

The music of Grace’s poem appears to involve playing off the rude and the polished.

Fussell comes to the rescue again, however, calling attention to the fact that poems such as these are not “stichic” (line based), but “strophic”—organized into stanzas, an approach “most appropriate for dense and closely circumscribed moments of emotion or argument.” We can see, too, that Grace’s poem is an adaptation of the sonnet form. While the setting off of the last two lines (or one line split in two) suggests a Shakespearean sonnet, “For the Silo Boys” is a modified Petrarchan sonnet, taking a turn, an altered or enlarged view of the subject, a little more than halfway through.

So now we return to the matter of meter. As regards the organization and syncopation of natural movements of speech, the music of Grace’s poem appears to involve a playing off of what I will call the rude and the polished. The rude is exemplified not only by the events of the poem, but also by its enjambment and the resulting lines:

of his face, a few fistfuls of grain
a calf sluggishly ate

of the cement silo whose walls
he was paid almost nothing

ears, and throat as far down
as his lungs. In the calf barn

Of course this rudeness of form fits with the rudeness of the dominant narrative: of the young, ill-paid, and seemingly valueless worker choked and perhaps killed in an agro-industrial accident. But (Fussell again): “a free-verse poem without dynamics—without, that is, perceptible interesting movement from one given to another or without significant variations from some norm established by the texture of the poem—will risk the same sort of dullness as the metered poem which never varies from regularity.” And thus, I am proposing, we appreciate the moments of “politeness”—the obviousness of the blades of grass, the simplicity of “he was paid almost nothing,” the classical reference, the sonnet form.

A lot of people take the term free verse literally, with the result that there is more bad free verse written today than one can easily shake a stick at. Most of it hopes to recommend itself by deploying vaguely surrealistic images in unmetered colloquial idiom to urge acceptable opinions: that sex is a fine thing, that accurate perception is better than dull, that youth is probably a nicer condition than old age, . . . ; as well as that Lyndon Johnson and Richard Nixon were war criminals, that the C.I.A. is a menace, that corporations are corrupt, . . . and that women get a dirty deal. All very true and welcome. Yet what is lamentably missing is the art that makes poems re-readable once we have fathomed what they “say.”

From that perspective, what matters is not Grace’s struggling to find or make meaning out of a banal tragedy, it is the art of what I am calling Grace’s “meter,” his juxtaposition of the rude and the polite.

William Eaton is the Editor of Zeteo. A collection of his essays, Surviving the Twenty-First Century, will be published by Serving House Books. For more, see Surviving the website. 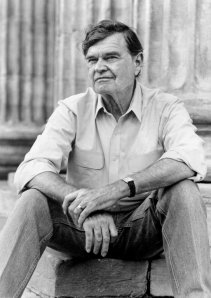 Paul Fussell (1924–2012; pictured at right), Poetic Meter & Poetic Form. The quotations above are from a revised edition published by McGraw-Hill in 1979. Best obtained used, via AbeBooks).

Andrew Grace’s For the Silo Boys, with his line breaks.

Grace reading his poem out loud.

My e-mail conversation was with Eric Weiskott, a professor at Boston College and the author, inter alia, of “Making Beowulf Scream: Exclamation and the Punctuation of Old English Poetry.” Journal of English and Germanic Philology 111 (2012): 25-41.

Others of my recent ruminations on poetry, include:

And “A phrase in connection first with she”, on one of Bob Dylan’s lyrics—metered poetry in the more traditional sense of the word “meter.”

For those who would challenge themselves further to reproduce the logic of line breaks in modern free verse, two other possibilities:

Click for pdf of The Meter of Contemporary Poetry