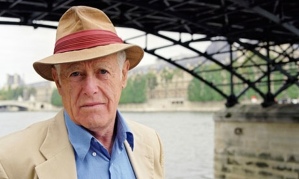 James Salter’s novel All That Is was a national bestseller in the US last year. A translation is now on the bestseller list in France. I was drawn to it by the taut, tense opening lines describing the experience of Americans in the Pacific during World War Two:

All night in darkness the water sped past.

In tier on tier of iron bunks below deck, silent, six deep, lay hundreds of men, many faceup with their eyes still open though it was near morning. The lights were dimmed, the engines throbbing endlessly, the ventilators pulling in damp air, fifteen hundred men with their packs and weapons heavy enough to take them straight to the bottom, like an anvil dropped in the sea, part of a vast army sailing towards Okinawa, the great island that was just to the south of Japan.

The main character, Philip Bowman is a young navigation officer. He carries out his orders efficiently and never questions the war. His vision of the enemy is a stereotypical image of the Japanese army. It is the image found in boys’ comics in the post-war years. The Japanese are fanatical, prepared to fight to the death, decapitating prisoners with razor swords, speaking in “their secret hissing language”.
The Japanese are defeated and Bowman returns to the United States. He starts to make his way in the world, going to Harvard, then getting a job as an editor with a literary publisher in New York. Bowman is successful in his career, but happiness seems to elude him. An early marriage ends in divorce and disillusionment. A series of romantic encounters follow, set in various European and American locations. There is sex, love, betrayal, and in one scene a particularly nasty way of getting revenge by using the daughter of an ex-lover. But it is difficult to care about whether Bowman will find happiness or not. Perhaps it’s because he has come to belong to a class of wealthy upper-class globe-trotters for whom travel, food, and culture are forms of distinction. Their knowledge of culture is what sets them apart from the masses.

The Paris he showed her was a Paris of vistas and streets, the view across the Tuileries, coming into place des Vosges, rue Jacob, and rue des Francs-Bourgeois, the great avenues with their luxurious shops – the price of heaven – the Paris of ordinary pleasures and the Paris of insolence, the Paris that takes for granted one knows something or that one knows nothing at all. The Paris he showed her was a city of sensual memories, glittering in the dark.

Days of Paris. They omitted the museums and the student quarter, boulevard Saint-Michel, and the hurrying crowds, but he took her to see, in the dedicated mansion on the rue de Thorigny, the pictures and etchings – many of them grotesque but others supreme – that Picasso had done of Marie-Thérèse Walter during their long love affair in the 1920s and ‘30s. Some of them were painted in a single inspired afternoon or only days apart. She had been naïve and docile when he met her, and he taught her to make love on his terms.

Maybe Bowman would have liked to have been Picasso. But unlike Picasso, who defended Spanish Republicans against General Franco’s fascists, Bowman has no commitment to anything beyond his own well-being. That’s why it’s hard to feel anything but contempt for him.

James Salter, All That Is

Robert McCrum, “How to be the hippest act in town even in your eighties.” The Observer, 25 March 2007.