There are times when old age produces not eternal youth but a sovereign freedom, a pure necessity in which one enjoys a moment of grace between life and death, and in which all the parts of the machine come together to send into the future a feature that cuts across all ages: Titian, Turner, Monet.  Gilles Deleuze and Félix Guattari

There is reason to celebrate artist Wayne Thiebaud, now in his 94th year and in the 7th decade of his painting career. He still works at his craft with the same routine he has kept for years—up at 6:30am and in his studio before breakfast, tennis with old friends, and back in the studio until dinner. If he lived in Japan, he would be a Living National Treasure (also Jasper Johns at 84, among others) because he is still trying to perfect his craft of painting. His latest exhibition is open until November 21 at Acquavella Galleries in New York City.

There is no question that he has achieved great success as reported in the Wall Street Journal. The interview by Alexandra Wolfe captures a bit of his personal philosophy about what he does.

Wayne Thiebaud, the American artist best known for his lifelike, almost edible paintings of cafeteria foods, has a new favorite word: “humblebrag.” “It’s like when all these people are honored at the Academy Awards they all get up and try to out-humble each other, ” he says, sitting in his airy studio in Sacramento, Calif. Mr. Thiebaud’s paintings have sold in the mid-seven figures and he is firmly ensconced in the canon of contemporary American greats, with a new solo show opening at New York’s Acquavella Galleries on Oct. 1. Still, he says he “can’t endure” his own work and he’s not “humble-bragging.” “I really am not satisfied with my work,” he says. “People view that as sort of humility but it’s not. It’s reality.”

He is also known for being a great teacher and mentor to many artists. He joined the faculty at University of California Davis in 1960 and only retired in 2000 but continued to give classes as professor emeritus. He discussed his teaching methods in an interview in 2011 with art critic of the San Francisco Chronicle, Kenneth Baker.

If one is interested in hearing the voice of a master talk about art with sophistication in language we can all understand, I recommend listening to the first 20 minutes of the interview. One will also be rewarded to discover his delightful sense of humor and his love for disparate forms of art.

I have always been fascinated by the work that artists make in their late years, if they have been fortunate to live a full life. Thiebaud is such an artist. I went to the opening, which he attended. He stood tall and straight, impeccably dressed in navy blazer, white shirt, bow tie, and his distinctive look of delight. Of the 46 works in the exhibit, 24 were painted since 2010. One of the late themes he has been working on since 2003 are beach scenes that are entirely different from his still lifes of food commodities where the objects are in stasis while decorated with luscious strokes of creamy paint. He has shifted his usual perspective in the scenes to one of the distant observer as if he/we are looking back to the ordinary activities of people enjoying the beach on a brilliant sunny day. The figures are blurred in the action of sketchy brush strokes. The scenes are divided into the beach itself and the sea of thickly painted greens, purples and blues and the white of the surf. In Triangle Beach the water becomes black in lower right corner as it moves off to the ocean. This intense light shadowed by intimations of abstract darkness has become a sign of his late works.

Lateness is being at the end, fully conscious, full of memory, and also very (even preternaturally) aware of the present.  Edward Said 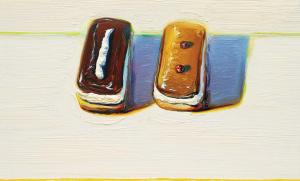 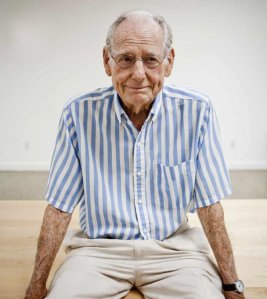 Photo: Wayne Thiebaud in his 90s.

Gilles Deleuze and Félix Guattari, What Is Philosophy?

Edward W. Said, On Late Style: Music and Literature Against the Grain