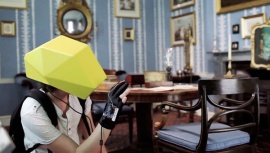 Two weeks ago, when I began reading Margaret Grebowicz’s Why Internet Porn Matters I learned that changes in pornography (i.e., an increasing virtual market) reflect and effect the way people think about sexuality, speech and power. Last week, as I dove into chapter 3, I discovered specific ways scholars speak about this topic. For some, pornography is a strictly masculine interest. It gets recognized—along truth and sex—as belonging to the order of the masculine (On the other hand, artifice, veiling, and seduction, get recognized as belonging to the order of the feminine.) Grebowicz explains Jean Baudillard’s proposal of reading pornography as

the ultimate medium of masculinity, but not because it has anything to do with power, or with men’s power over women’s bodies. Instead, pornography is a hypermasculine because it makes sex hyperreal, more detailed and better than the real thing. Like America, pornography is hyperreality, pure simulation, endless circulation of commodities.

In this sense, pornography rejects the seductive power of the feminine and becomes a purely informative way of communication. Another alternative is to follow media critic Laura Kipnis’s suggestion to

read pornographic materials not as real but as a form of science fiction or other speculative fiction which ‘imagines different futures’: ‘One model for looking at pornography would be as a kind of science fiction; that is, as a fantasy about futurity, whose setting is the present. We don’t get offended when science fiction imagines different futures, even dystopic ones set in worlds that look like our own.’ Indeed, there is clearly something complex in the way that pornography manipulates our experience of what is real, like other genres of visual and narrative fiction.

These ideas seem in conflict. But aren’t both suggesting that pornography, rather than being a simple reflection of reality, imposes an unreal idea about sexuality? The answer may vary across markets.