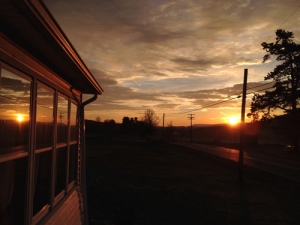 This week I started reading a book on the Jewish Mafia passed on by my friend Rick Mester (who read it for research while writing his novel). Tough Jews is one of those non-fiction books that reads like fiction, describing characters in detail and constantly setting the scene for the reader. Of course I could not help but picture it as a movie and had to laugh when I read the scenario below:

The troop later found out what had happened. After killing Walter Sage, Gangy had an epiphany few gangsters experience in time: If they have me kill Walter, then, sooner or later, they will have someone else kill me. By the time the kill car had pulled over, his mind was made up. He would run.  He went for miles through the trees. The night closed in. The stars came out. He found a train station in a clearing. He bought a ticket and went as far west as the train would take him. Upon reaching California, he looked for work. He started in the movies as an extra. He worked his way up. He changed his name. He was now the actor Jack Gorden. A few years later, a police officer, who had long been looking for the missing Gangy Cohen, found him on screen in the movies, playing a cop. Gangy was brought back from California in handcuffs. He was tried. He was acquitted. He was a hero to the boys. If things got too rough, they could always go to Hollywood and become movie stars.