I bought The Good Thief by Marie Howe because it was the only poetry book I found for sale at the Miami International Airport’s outpost of Books & Books, South Florida’s beloved independent bookseller. In part, I also bought it because of the very pretty reproduction of Rothko’s “Light, Earth and Blue” on its cover, and I have a weakness for pretty books.

Although it will not be ranked among my favorite poetry collections, here are a few lines I loved from the poem “Without Devotion”:

Without devotion, any life becomes a stranger’s story
told and told again to help another sleep

or live. And it is possible
in the murmuring din of that collective loyalty

for the body to forget what it once loved.
A mouth on the mouth becomes a story mouth.

The last time we were in Boston, my husband and I stopped by the The Curious George Store in Harvard Square. Granted, it helps to have a baby on the way, but the shop is a certified happy place. We got our baby-to-be two books — Curious George Cleans Up and Cars: A Pop-Up Book of Automobiles by Robert Crowther.

Now that my son is sort of paying attention to things, I’ve tried reading him the books, especially Cars. This pop-up book is a work of art, which also means that it is not baby proof. Its lovely moving parts are in constant danger of being torn off and eaten.

Despite these hazards, I managed to read the following fun facts:

I must confess I did not know who Nadine Gordimer was until a few months ago. At a used bookstore, I picked up a copy of one of her novels, prompted by its arresting title: Get a Life.

This novel is not a relaxing beach-read. But it is worth the effort made. It’s probably not a coincidence that she and fellow Nobel Prize-winner J.M. Coetzee are both from South Africa, as tragedy looms behind their every phrase.

Below is Gordimer’s treatment of a dinner between a woman and her husband’s father. It’s important to know here that the woman’s husband, the man’s son, is sick:

His father had chosen what he thought would be her kind of place. She wanted to respond to this wish to please, to divert — and — was it — console both the father and herself by breaking bread, drinking wine in a covenant of those invisible liens that must exist unthought-of, unrecognized in the Christmas pecks on the cheek, between the one who generated, from his body, the son, and the one who receives the son in hers. Presence of death standing by makes a sacrament of tenuous relationships.

Last night, I threw a friend a baby shower. In thanks she brought me the complete works of Colombian poet Maria Mercedez Carranza, the South American nation’s most well-known female poet.

Carranza’s work is modern, powerful, succinct. The only thing that keeps me distant from her writing is the fact that she killed herself in 2003 at the age of 58.

Below is a poem that forms part of her 1997 collection El Canto de las Moscas (The Song of the Flies). The collection is comprised of 24 short poems, each dedicated to a different Colombian town. What the 24 towns have in common is that they are small and long-suffering.

A blackbird sniffs at
the remainders of
life.
It could be God
or the assassin:
it makes no difference now. 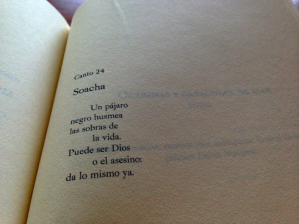 The news always seems to find me last. This would even include poetry news, which is supposed to be my thing. So it is that today I finally heard of a poem, published by The Awl, that went viral on social media and prompted responses in outlets as varied as Feministe, Salon and The Guardian. The poem is called “Rape Joke” and was written by Patricia Lockwood.

To read the complete poem, which everyone really should, please click here.

Below are a few spellbinding lines, out of many, from Lookwood’s poem:

The rape joke is that you were facedown. The rape joke is you were wearing a pretty green necklace that your sister had made for you. Later you cut that necklace up. The mattress felt a specific way, and your mouth felt a specific way open against it, as if you were speaking, but you know you were not. As if your mouth were open ten years into the future, reciting a poem called Rape Joke.

The rape joke is that time is different, becomes more horrible and more habitable, and accommodates your need to go deeper into it.

Just like the body, which more than a concrete form is a capacity.

As a former magazine writer, I am not a big fan of “articles.” Most pieces call to mind an editor and a deadline both looming large. But for my last Zeteo is Reading post of the week, I am going to do an almost article. It’s a reprint published in The New York Times of writer George Saunders’ recent commencement address at Syracuse University.

In his speech, he tells graduates:

What I regret most in my life are failures of kindness.

He goes on to explain why he thinks we are not kinder:

There’s a confusion in each of us, a sickness, really:selfishness. But there’s also a cure. So be a good and proactive and even somewhat desperate patient on your own behalf – seek out the most efficacious anti-selfishness medicines, energetically, for the rest of your life.

These words resonated with a text I am now rereading, Alan Watts’ The Book. This work basically says what Saunders did in his speech, only with more examples and less patience. But Watts is funny and right, so it makes it all ok.

Almost every phrase in The Book could be highlighted, but here is one I hope to remember:

…the only true atom is the universe — that total system of interdependent ‘thing-events’ which can be separated from each other only by name.

Morrissey, via The Smiths, also said something of the sort in his song ‘I Know It’s Over’: