For a bit of summer reading, I just today finished Jerome K. Jerome’s Three Men in a Boat (To say nothing of the dog) (1899), which he originally intended as a serious travel guide but became an exercise in hilarity. We all hear that inner voice when we read, which is relatively consistent. For some reason, I heard the voice of actor/director/musician Hugh Laurie when I read it, maybe because prior to the television series “House,” he played a bit of a bumbling idiot in many of his roles—despite being educated at Eton and Cambridge.

I read whenever and wherever I can, and in whatever capacity—print or online. I read most of this book on the subway, and imagine my embarrassment when I actually caught myself laughing aloud. As a result, the woman next to me began reading over my shoulder and she laughed as well. Jerome meanders through the story, often stating that whatever is occurring reminds him of something else and then explains that for a page or two, “—Oh! I am talking about our present trip now.” But that’s exactly what makes it so amusing.

From the beginning, the voyage appears to be somewhat doomed. Packing a toothbrush becomes a bit of a nightmare:

My tooth-brush is a thing that haunts me when I’m travelling, and makes my life a misery. I dream that I haven’t packed it, and wake up in a cold perspiration, and get out of bed and hunt for it. And, in the morning, I pack it before I have used it, and have to unpack again to get it, and it is always the last thing I turn out of the bag; and then I repack and forget it, and have to rush upstairs for it at the last moment and carry it to the railway station, wrapped up in my pocket-handkerchief.

As noted by a recent article in The Guardian, despite it having been written more than a hundred years ago (never once out of print), it remains relevant and a “comic masterpiece.” Jerome and his companions are each humorous in their own way—to say nothing of the dog.

Whose voice do you hear when you are reading? Leave a comment.

Not nearly as funny, I am re-reading The Metamorphosis (1915) by Franz Kafka. I read it many years ago and felt that I might have a different perspective. I did a quick search for it, knowing I would find a free version online, when lo and behold, I found an article about an illustrated children’s version of Kafka’s stories  entitled My First Kafka: Runaways, Rodents, and Giant Bugs by Mattheu Roth and illustrated by Rohan Daniel Eason.

The giant bug on the cover is much more adorable than the one I imagine when I am reading Kafka’s original text. Gregor the giant insect makes me squirm initially. But in the end, I feel such sympathy for the pathetic creature, despite my revulsion. He is a man who is transformed into something ugly, something we step on, or in my case in the subway yesterday, walk around carefully (he was a really big bug). However, it is not a transformation that Gregor chose for himself, but one that happened to him.

He thought back on his family with deep emotion and love. His conviction that he would have to disappear was, if possible, even firmer than his sister’s. He remained in this state of empty and peaceful reflection until the tower clock struck three in the morning. He still saw that outside the window everything was beginning to grow light. Then, without his consent, his head sank down to the floor, and from his nostrils streamed his last weak breath.

His death, also without his consent, comes as a relief for him, and for us, as we must no longer pity something so repelling. Our ability to sympathize with poor Gregor, like that of his family, has its limits. The Metamorphosis is difficult to interpret, which many believe was purposeful on Kafka’s part. Gregor is nothing like us. Or is he? 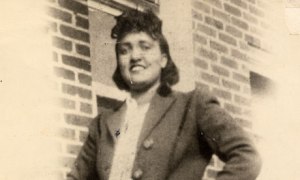 Last summer, I read a biography called The Immortal Life of Henrietta Lacks by Rebecca Skloot. Whether or not you know who Henrietta Lacks was, her cells are likely part of you. Here is a little bit about her from Ms. Skloot’s website:

Her name was Henrietta Lacks, but scientists know her as HeLa. She was a poor black tobacco farmer whose cells—taken without her knowledge in 1951—became one of the most important tools in medicine, vital for developing the polio vaccine, cloning, gene mapping, in vitro fertilization, and more. Henrietta’s cells have been bought and sold by the billions, yet she remains virtually unknown, and her family can’t afford health insurance.

After more than sixty years, Henrietta Lacks has finally been given the recognition she deserves. From The Guardian article: “Henrietta Lacks formally recognised as source of HeLa research cells”:

The National Institutes of Health (NIH) announced on Wednesday that genetic research based on cells taken from Henrietta Lacks, known as HeLa cells, would include acknowledgement in published form of the woman and her life. The change in protocol, which strictly applies only to NIH grant recipients but which all researchers are encouraged to adopt, was welcomed by descendants of Lacks, who died in 1951. The move could also lead the way to better privacy measures for research participants and better data-sharing among scientists….

‘We should all count Henrietta Lacks and her family among the greatest philanthropists of our time, when you consider how they have contributed to the advancement of science and human health,’ said the NIH director, Francis S Collins, on Wednesday.

Thank you and congratulations (finally), to Henrietta Lacks and her family.