The only good thing that came out of 9/11 was that the building fell on him.

The New Yorker has begun to produce short documentaries to view on line. The topics are as varied as the contents of any recent print issue, and the stories might last ten or fifteen minutes. They seem to be excellently produced. I skimmed most, but a lead for a mini-doc caught my eye: currently active FBI agents and former CIA agents were testifying on camera with passion and detail that 9/11 was almost certainly preventable.

There was new evidence, and old evidence was effectively marshaled.

Except as a massive tragedy and turning point in national and international politics, I hadn’t thought about the details leading up to 9/11 in years. Was there something new to be said?

This was the New Yorker, known for meticulous investigative journalism. What could they have dredged up to reopen a story I thought was settled years ago? As it turns out some formerly classified reports were declassified less than a year ago.

There was in fact new evidence, persuasive evidence, and yes, if only CIA had shared information with the FBI it seems all but certain that 9/11 would never have happened.

I watched the 15 minute exposé stunned. I can’t retell the whole story. Its detail is far too intricate. For anyone wanting to follow up, see the documentary, and read the  New Yorker articles by Larry Wright on which it’s based. Wright appears as one among several narrators and principals in this complex story of intrigue and cover up. Here are the bare bones.

The CIA knew of the presence of al-Qaeda operatives in the USA more than a year before the attack on the Twin Towers and the Pentagon.

They knew of and monitored an “al-Qaeda summit” in Malaysia where attacks on the US and elsewhere were discussed. They broke into a room of one delegate and photographed the US passport and visa of a future 9/11 pilot — evidence of plans of al-Qaeda to come to the States.

They knew that the al-Qaeda operatives responsible for the October 2000 bombing of the US Cole — 17 Americans were killed — were present at the summit.

The CIA operatives jealously guarded their pursuits and findings from the  FBI. They hoped to infiltrate al-Qaeda abroad and here in the States. They didn’t want the FBI crashing their party or hampering their business.

Legally, only the FBI can investigate suspected terrorists and make arrests within the US. The CIA’s mission is to spy on and infiltrate organizations on foreign soil. CIA knew al-Qaeda operatives were taking flying lessons in Southern California. Although persistently queried by the FBI, they stone-walled.

They monitored one of the 9/11 pilots as he returned to Yemen less than a month before the attacks to visit family (and give a last good bye?). His return to the states and his passing through customs were watched by the CIA. They had photographed the US passport and visa more than a year earlier. Neither they nor the FBI put a close tail on him as the day of the highjacking approached. They knew he had learned to fly, and that years earlier bin Laden had been recorded in an interview saying that US planes would be potent weapons of attack. 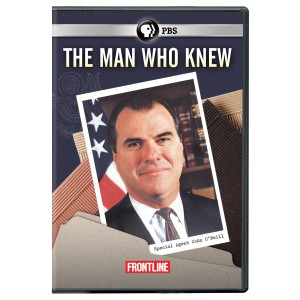 There was pure hatred between the CIA and the FBI. In the documentary we get to see Michael Scheuer, who was head of the CIA unit tasked to monitor and infiltrate al-Qaeda and “get” bin Laden testifying before Congress some time after 9/11. His FBI counterpart was John O’Neill, of the NYC anti-terrorism task force.

For reasons left unexplained, O’Neill left his FBI position just weeks before the 9/11 attacks. He moved into the Twin Towers as its head of security. There was something fateful about his decision.

He told a friend that he believed al-Qaeda was not done with its plans to attack the towers. (It had laid bombs there eight years earlier.) When the towers collapsed, O’Neill was inside and killed.

Scheuer appears before a Congressional investigative committee after the disaster. He responds to a question about John O’Neill and the FBI task force.

He speaks with icy deliberation: “The only good thing that came out of 9/11 was that the building fell on him.”

The CIA deliberately withheld information from the FBI bearing on a planned attack for well over a year despite the FBI’s repeated requests to see it for its own investigations. In Larry Wright’s sober judgment this is obstruction of justice.

The names of the CIA agents involved in sequestering information from the FBI are known but classified, and will remain so. Thus legal charges are impossible. Nevertheless, the New Yorker investigation and documentary make an utterly convincing case that deep institutional animosity and personal hatred assured that al-Qaeda would not be stopped in a plan that with inter-agency cooperation could have been scotched months before its tragic denouement.

Appendix: My shock won’t be shared by those who have followed the stream of books and reports on these events that have surfaced in the past six or seven years. My reading tends to follow art, philosophy, psychology, science, literature, or religion rather than international espionage, congressional investigations, and murky footsteps before and after 9/11. Having been stunned by the New Yorker report, I did some slogging. Googling figures named here and following their threads is both enlightening and depressing. A second notable revelation is that Condoleezza Rice and the State Department failed to follow up on CIA warnings in the months before the attacks. They didn’t want to formally acknowledge the warnings or act on them for fear of a paper trail. They wanted to be able to deny they had been warned. I’ve let the New Yorker piece speak for itself almost without comment. I trust it is fundamentally reliable.

Credits: For the mini-doc on the lead-up to 9/11, go to http://www.amazon.com/gp/product/B00RR12SS2/ref=nav_timeline_asin?ie=UTF8&psc=1; and http://www.newyorker.com/culture/culture-desk/our-new-television-show. For more on Scheuer, go to “Bin Laden Issue Station,” https://en.wikipedia.org/wiki/Bin_Laden_Issue_Station; also, see Larry Wright, “The Counter Terrorist,” New Yorker, January 14, 2002 (on John O’Neill), and “The Agent,” New Yorker, July 10, 2006. See also his book, The Looming Tower: Al-Qaeda and the Road to 9/11, Vintage, 2007. The New Yorker documentary presents information declassified only last year; thus it confirms and upgrades Wright’s earlier reports.