I don’t frequent Facebook much, but from time to time I find humorous clips passed on from friends — things I’d otherwise miss. There are also the “happy birthdays.” Occasionally someone forwards a clip that jumps out and lands with a clap.

My friend passes on a writer who’s rebutting some of the views in the TV series, “Cosmos: a Spacetime Odyssey.” That was the clap.

That witty rebuttal brought me, circuitously, to Sam Kriss’ ingenious rebuttal of Richard Dawkins, who casts birds to the dustbin. Things quickly fell into place.

I’ve been here before in previous posts, communing with whispering trees and mists. As before, I target  the misbegotten belief that Science gives us everything we need for understanding and appreciating the world. It’s a kind of deity in progress.

The misbegotten corollary is that science — defined as the rational pursuit of knowledge — is the good engine of civilization, while religious and aesthetic sensibilities are dangerously neanderthal. Exit any world of starry nights or sun-rise choruses or capering birds.

I don’t brush aside astronomy or the study of birds. I’m in step with Carl Sagan getting ecstatic over starry wonders — “Billions and Billions of. . . ”  He celebrates wonder and awe before heaven’s infinite expanse, and passes on wonder even when our grasp of abstract formulae is lacking.

The images displayed on this page speak to the science-literate and the science-challenged alike. You needn’t grasp light-year measurements to appreciate what’s before your eyes.

A humbling, alluring aesthetic presence, even a tinge of the religious sublime, is there for the willingly imaginative eye.

Just to clarify: I take the religious sublime — in music, in the heavens, in cathedrals, in snow squalls at sea — as an opening for awe and reverence that can float supremely free of creeds or technical professions of faith.

Seen now as religious, now as aesthetic, now as a gift of telescopes and cameras, these images provide a texture of life, moments of felt-reality. There’s an experiential richness that overshadows derivations or mathematical explanations. This star-gazing doesn’t celebrate the Triumph of Rational Thought in Contemporary Cosmology. 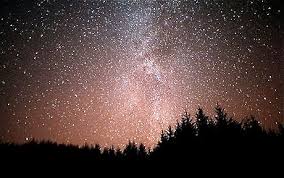 Militant atheists — Richard Dawkins is one — see religion as always and everywhere obstructing the noble march of Rational Pursuit.

But where do science and rationality come from? There’s nothing pure about the birth of modern cosmology. Giordano Bruno’s sun-centered system is entangled in magic and Arab astrology. He favored an Egyptian god, Thor. He was a Dominican Friar.

There is no immaculate conception in the emergence of science. Bruno’s break-through wasn’t part of a noble march of scientific rationality any more than Napoleon’s toppling of monarchies was part of a march of democratic principles.

It’s fine for cosmologists to have the earth go around the sun, but it’s hardly neanderthal for the rest of us to say that the sun rises in the East and falls in the West. If I’m in an astronomy class I’ll change my tune. But I won’t mock the weather man for reporting that the sun rises at 6:30 a.m.

Van Gogh’s “Starry Night” gives us a marvelous prospect on the heavens. When he paints these stars he’s neither irrational nor dismissive of science.

I can be bowled over by Van Gogh as well as by the astronomical pictures I put on display. They all present night-sky-appearing.

The stew pot of culture simmers with astrophysics and mystic star-gazing, with Van Gogh and the hymn, “O Beautiful for Spacious Skies.” It’s richer for the mix and blending. Deifying rational science, making it the sole key to the valuable, is painfully blind.

The astronomer Niel DeGrasse Tyson, successor to Carl Sagan, runs the TV Show, Cosmos. He passes on a myth about Gordiano Bruno that sustains the misbegotten view that rational science is the key to positive human endeavor: Bruno died a martyr for science.

True, he was executed by the Catholic church, but not for his science (such as it was) but for his denial of the Incarnation.

Scientists get irate at the thought that the church should interfere. Fair enough. But does it follow that everyone who does not put science on a pedestal should be martyred?

By today’s standards Bruno believed nonsense. His heliocentric hypothesis didn’t spring from a rational approach to the universe but despite his weird array of beliefs.

The church should be condemned for killing him (and others), but Bruno should not be hailed as a champion of (what we now call) science. And it’s neanderthal to praise science while battering all aspects of religion, and downplaying the centrality of aesthetic, political, and moral connections to the world.

In displaying their sweeping allure, Starry Night and the photographs displayed here needn’t testify to a love of science. Each adds value and meaning to our world whether or not it’s linked to science and rational thought.

Outside a shimmering band of turquoise near the horizon brings a soft sparkle to the beads of dew hanging from trees in early bud; the heavy clouds in the distance look peach-pink and insubstantial; so do the old pale brick houses

Our lives and worlds are more shimmering and complex than science alone can know.

Science worship, especially its penchant for arriving at simple formulae to explain complex phenomena (fine in focusing many sectors of the world) can be crippling when foolishly extended. Here are more missteps in the narrative of “Cosmos.”

The host pegs Italy in the 16th Century as simply religion-bound (a bad thing) and Spain as simply devoted to exploration (a good thing):

Spanish love of exploration is more properly called love of world-conquest. They wiped out indigenous peoples in North and South America by the millions. Exploration is a soft word for subjugation. Our own ventures in outer space today are more consolidations of military superiority than projects widening the reach of science.

More people speak Spanish in the New World than speak Italian because the Spanish had the capital, political will, and national solidarity to support expeditions of conquest, colonization, and trade. Italy was lacking. It takes a complex historical narrative to show this. An abbreviated formula won’t do.