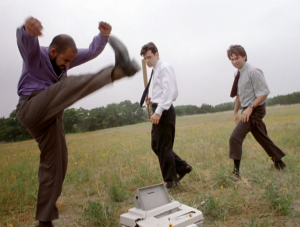 Last week, I attended the Technology, Privacy, and the Future of Education symposium at NYU’s Media, Culture, and Communication department. One panelist, NYU Sociology’s Richard Arum, addressed the impact of technology on education-as-vocation—a subject on which I recommend Sugata Mitra’s self-organized, child-driven pedagogy. The other panelists focused primarily on digital technology’s impact on educational administration. Debates arose around the development of online-only curricula, apps that send parents reports on how late their children arrive to class, and the ethical implications of collecting data on students, including their class participation, web-browsing, eating, sleeping, and exercise habits. Professor Mitchell Stevens of Stanford likened the efforts of tech tycoons—Bill Gates, Mark Zuckerberg, etc.—to remodel twenty-first century education in their industry’s image to the “philanthropic” efforts of Ford, Carnegie, Mellon, and other industrialists to influence twentieth-century education.

Science promises humans the power of gods—the ability to see all, to know all, to move objects with the mind, to live forever. Social inequality, however, turns these dreams into nightmares.

What fascinated me most about the symposium were the arguments of those panelists and audience members opposed to student data-mining. Awareness of historic power imbalances colored these arguments; but far from suggesting solutions to these power imbalances, principled arguments against the use of technology were invoked. Professors’ and administrators’ ability to surveil and evaluate students’ every move was countered by the students’ right to privacy. Nobody considered whether equality could also be achieved by students’ surveillance of professors and administrators. State surveillance of citizens was discussed, but never the suggestion that citizen surveillance of politicians, police, and militaries might significantly reduce corruption, police shootings, and war crimes. 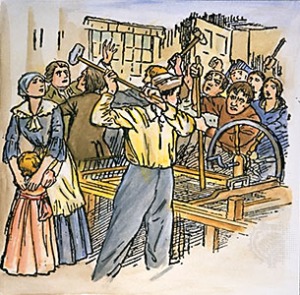 The Luddite mentality reached its logical conclusion when one panelist discussed the transformative power of machines in terms of job destruction. No distinction was made between destroying jobs and eliminating the need for manual labor altogether, in the age of 3D printing, drones, and digital “telepathic” communication.* The ability to outsource manual labor to robots is countered by the right to toil mindlessly for the benefit of the capitalist class.

This discussion reminded me of a lecture I attended a few years ago at the New York Academy of Sciences given by Aubrey de Grey, who suggested that humans may soon achieve immortality. Every audience member who participated in the Q&A rejected de Grey’s ideas based not on scientific grounds, but moral ones—in particular, the argument that immortality would only benefit the privileged. These people, most of them members of the scientific community, could imagine a scientific advancement like immortality more easily than a social advancement toward a non-oppressive world no longer fragmented by nationality, class, race, gender, etc. The achievement of immortality is countered by the right to die.

Science promises humans the power of gods—the ability to see all, to know all, to move objects with the mind, to live forever. Social inequality, however, turns these dreams into nightmares. The solution to power imbalances has never been to smash the machines, but to harness them in the creation of a non-oppressive society. Surveillance, drones, job-killing machines, death-defying medicines—none of these sciences are the problem. The problem, as always, is with our political science.

*For a discussion of ongoing efforts to perfect “telepathy” and “telekinesis,” see Chapters 2-3 of: Kaku, M., (2015). The Future of the Mind: The Scientific Quest to Understand, Enhance, and Empower the Mind. Anchor Books: New York.