Downton Abbey, now in its sixth and final season, has been a TV phenomenon, with audiences in more than 200 countries, including 160 million viewers in China. In the US it is the most popular PBS program ever, and, during the 2014-15 viewing year, it came out twentieth in popularity among all network and cable programming, just behind Monday Night Football.

Why has it had such broad appeal? It’s difficult—perhaps impossible—to generalize for the planet, for viewers in places as disparate as Saskatoon and Shanghai. At the root, the series does dramatize a range of human stories—love, birth, death, mendacity, betrayal, grief, hope. But so do many films and TV programs. Why Downton Abbey and not a show that isn’t a costume drama? More specifically, why does it have such appeal for nearly ten million Americans?

Millions of Americans are falling out of the middle class. Against this grim reality, the appeal of Downton Abbey and its final season.

Various commentators have speculated. TV Guide in January 2013 offered six reasons, among them that the upper-class soap opera plot makes us feel classy, that we’re captivated by love stories with uncertain outcomes, and that we indulge in “materialistic voyeurism.” “We’re in a similar situation economically and socially,” the Guide proposes, noting that Downton episodes have focused on women’s rights, sexual liberation, class aspirations, health care, and questions of egalitarianism. American viewers can relate to struggles that explore many changes of our own recent decades and, in some cases, matters that remain unresolved.

Yet the list above overlooks what may be a more visceral viewer connection: the fundamental social and economic upheavals now underlying Americans’ deepest anxieties. In 2015-16, millions of Americans are falling out of the middle class. The same manufacturing jobs that, one hundred years ago, sustained Britain’s former servants have disappeared. Higher education no longer guarantees prosperity, and some experts argue that the US will never again experience the soaring economic growth of the twentieth century. Inequality grows as the profits that corporations continue to realize now go primarily to the 1 percent. Against this grim reality, the appeal of Downton Abbey may be based in the darker undercurrent of economic decline which lurks beneath the character’s stories and blurs into ours.

Ultimately, despite the nostalgic surface, Downton Abbey is about the end of a way of life. The seeds of decline were planted in the very first season with the uncertainty of who would be heir to the estate. And there was the backstory: like many other British aristocratic families of the time, the family needed to be rescued financially by Lord Grantham marrying a wealthy American. In this final season, the squeeze on Downton finances receives more attention, primarily through frequent reminders of the shrinking servant staff.

That’s no surprise. It’s a matter of history. We know what happened to those great estates and all the servants who pampered the owners and kept the establishments running. To an extent never duplicated in the US, positions as servants at Britain’s estates once were a major source of jobs. At the beginning of the twentieth century, domestic work was the country’s largest employment category, with one and one half million people engaged as maids, cooks, waiters, valets, butlers, laundresses, gardeners, gatekeepers, stable-lads, chauffeurs, etc. By the middle of the twentieth century, however, the vast majority had migrated to fill other jobs—jobs that offered equivalent compensation for shorter work days and the opportunity to live private lives in their own homes with their own families. Perhaps most importantly, they appreciated the opportunity to fulfill individual aspirations thanks to the range of employment opportunities.

By 2015 the number of domestic workers in the UK numbered only 65,000, the great majority in the category of independent contractors working for multiple employers, rarely living in some vestige of servants’ quarters.

Aristocratic estate owners also became anachronisms. For centuries they had financed their extravagant life styles from the profits of the crops grown on their vast land holdings, and they were aided by the high tariffs that were imposed on imported crops. But those tariffs ended with a reform act in the late 1800s. Britain’s scales tipped in favor of manufacturing and commercial enterprises, with a new group of rich—often from humble origins—taking charge. By the 1920s, aristocratic families felt the heavy burdens of death duties and high taxes. 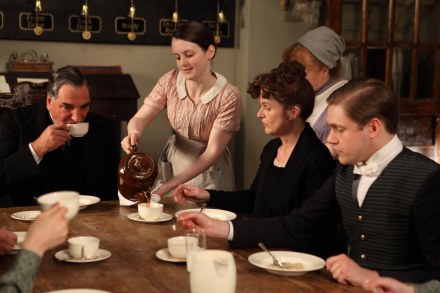 Few estates could afford to exist without their doors being opened to paying visitors or the property being rented out for events and to be used as film and TV sets. A few were even turned into theme parks with jungle animals. More than a thousand grand homes were demolished. Some aristocrats, keeping their titles but not their former power and prestige, still live in corners of their ancestors’ great houses and devote their days to maintaining an income stream, obsolescent remainders of what was.

The series is diverting to watch. The furnishings are elegant, the multiples plots are seductive, and the characters enjoy happy endings by the final show, almost every one pairing off in love and marriage, and with babies on their way. It’s yet another replication of Shakespearean comedy—in which a world temporarily gone awry finds its way to a satisfying equilibrium, purged of the unsettling elements and promising a contented future.

Yet another replication of Shakespearean comedy—a world gone awry is purged of the unsettling elements and promises a contented future.

Yet, knowing history—and thus knowing what will happen to these people and their estate—we watch the series’s fictionally satisfying conclusion with an edge of dramatic irony. The apparent survival of the Downton Abbey world, constrained as it may be, is an illusion. In the 1920s that world was already coming undone, notwithstanding the happy festivities that conclude the TV series. It would be gone by the middle of the twentieth century.

In 2016, a way of life that tens of millions of Americans once enjoyed also appears to be collapsing. But unlike the residents of the Abbey—particularly the servants—who went on to other, often satisfying, occupations, finding new careers and comforts, we have no idea where we will end up. Our futures lack the hopes our predecessors enjoyed. And a TV series is only a brief diversion.

Downton Abbey and the End of a Way of Life