Nothing is more fascinating — and frustrating to others — than our capacity to manipulate the image or story we present to others. In an acute way this capacity to pretend or impersonate raises the question of who we are beneath public appearances.

The clash between public appearance and underlying reality plays into the hands of those who deceive, sometimes in criminal activities, sometimes just as part of a harmless game of charades or a sober theatrical performance.

Some persons even have trouble knowing who they are beneath the identities they project as they assume this role or that in their daily activities. They ask sometimes plaintively, “who am I, really?” But even to ask that of oneself may be an acquired skill that some never really develop. What is an identity, anyway?

In an end-of-the-year New Yorker post, hidden half way through a cat-and-mouse story of a girl’s multiple fraudulent identities, we’re reminded how crucial narrative is to our lives. Maria Konnikova, the essay’s author, lifts a quote from Jerome Bruner’s classic Actual Minds, Possible Worlds. Starting a defense of imagination and story, he proposes that

Narratives can be fuzzy, conflicting, deceptive, and unfinished. They’re nevertheless inescapable, especially in forming or discovering a personal identity. We all want to know who we really are, and who others really are, beneath appearances. These are often existential questions, crucial to ask, however hard they are to answer. Stories start up the search.

Objective facts can establish a “file identity” — date of birth, degrees earned, annual salary, criminal record. But these miss the 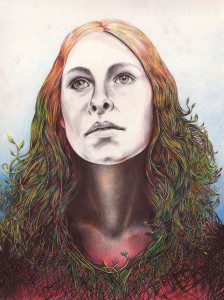 heart of identity, my own or yours. We want stories.

In the meticulous detail so characteristic of a New Yorker piece, Konnikova presents a rare, even exotic, case of serial identity fraud. She’s a young women “on the run” — though she periodically settles in under false pretenses for months at a time.

She’s a bit like a secret agent on the run. But in one crucial respect, as we’ll see, she’s not at all like a spy under wraps or a double agent, for spies and double agents know who they are. There’s a self beneath the performances.

We have here a rare and exotic bird who challenges our understanding of the intriguing and often unhappy complexities of personal identity.

There’s not just one story that fixes personal identity. Looking at Konnikova’s exotic case, it seems that identity has to involve the interplay of three plot lines or stories. This trio of narratives, often at odds, is what makes identity so often fraught and unfinished.

tell you or someone else.

Finally there’s the story I tell myself in solitude and reverie (and sometimes reveal to intimates). It differs, in most cases, from what others say about me and from what I tell others.

Adolescence seems to be a time when the contrast between theatrical presentation of self and a solid sense of who one is underneath the ongoing drama becomes pressing. The possibility of a story with three plot lines is suggested by the three-part image, of no one in particular, to your right.

What’s missing for the young woman The New Yorker describes is a capacity to tell her story to herself, in solitude and reverie, or just to know what she’s doing month to month, year to year. That’s what’s exotic.

In standard scams, deceivers tell themselves a story in solitude after the scam (it’s not the story they tell their marks). This young woman does not.

She’s a rare and exotic bird

Our exotic exhibit is a genius at performing fraudulent identities. But to our consternation, she has no story she tells herself. She doesn’t fit the Cosby pattern. She’s a con, but her false stories are not floated to surreptitiously gain money or power, celebrity or sex.

Trump floats an inflated identity to get your applause. A dishonest car salesman floats a friendly identity to get into your pocket book. But our exhibit — a master of disguise — lacks underlying motives that drive her. She lacks a story of who she is to herself, told in solitude.

That makes her nearly incomprehensible. There’s no bedrock or sandy bottom. There’s no there, there (as Gertrude Stein famously said about Oakland).

“She” shows up in Ireland with one story and set of credentials. In Australia “she” has a different story and different credentials. In Canada yet a third set of papers and stories appear. She has various “file identities” but no personal identity. (Henceforth, I drop scare quotes hugging “she” and “her.”)

She gets employment and lodging performing scams, yet there’s no one inside to tell herself her the story “after hours,” as it were. There are no puppeteer behind the puppet, no man behind the con, no actor behind the acts — it’s pretense all the way down.

She can’t relish her success at pretending because the fraud of the month is all she has. There’s no looking back later to say, “Damn, I’m good at taking them in!” Or, “I really feel ashamed!” Or, “I’m going to beat this addiction.” She’s a kind of idiot savant, with only minimal awareness of her genius. A genius without solitude, without soul.

Her parents claim to know who she is. They have her file identity, the facts of her birth and schooling and behaviors. But

they can’t tell her story and are as confused about the creature they raised as we are. How can she lack the story we might expect any child to begin telling to herself? But there’s no story to share. She can’t spell out what she’s doing to her parents.

She can tell the story of deciding to dance and why she dances. She isn’t only the dance. She has a personal identity.

Our serial deceiver is always on stage performing. She can’t step off stage to consider her performance as a being distinct from that performance. The dance and dancer are one.  There is no platform from which she might say to herself that her performance is false. To her, it’s neither true nor false, it just happens.

In the images to your right the doubleness would be a doubleness others see; to herself she has no doubleness, no inner and outer, no wavering of the sort that might arise in late night reveries.

There’s no bedrock or sandy bottom. There’s no there, there

Only others see her performance as an episode in a narrative of serial deception. Without anything deeper than the self she performs, she is hardly a full person.

What is she?  Not a full person, not a potential person, not an ex-person, but what? Perhaps we have the pieces of something that could be assembled as a person. But she couldn’t do the assembly. How does a non-person assemble a person?

Our adept deceiver begins to look merely person-like, a phenomenon to diagnose in terms of mental illness. No one can find a  plausible “she” who “knowingly” launches a series of cons.

Does this person-like exhibit manifest PDD, person-deficiency disorder? If so, there’s no responsible self and there’s no one to arrest and charge with fraud. With heart failure, we call for a transplant or try to reboot. With absent-personality-disorder, we might wish for a transplant, but there are no donors, and spontaneous generation of “a self” seems far fetched.

I’m not sure we get very far with mental health classifications. To my eye, she’s far more complex than than professionals with labels can handle.

this con-artist-sans-self needs a self installed but perhaps she’ll never be fixed; we don’t have a manual for rebooting or for self-generation

We who are luckily disorder-deprived can ask how much “control” goes into acting a part, performing a role. Sometimes I’m fully aware of my need to play a role and I more or less self-consciously, deliberately, gear myself up. I prepare to deliver a lecture or to meet three job applicants.

At other times I’m half way into my day with no self-conscious or explicit preparation at all. I’m on automatic as I shower, check mail, get dressed — with no sense of an “I” preparing for that episode of my life.

Is it necessary is it to have an “executive self-in-charge” — one that gets us onstage and welcomes us offstage before and after competent performance? Maybe at times, for a moment, I’m like the girl with an absent self.

But there’s a crucial difference.

Unless I’m asleep or drugged, I can always, as needed, call on the self who confers continuity between episodes, and evaluates needs for revision. This self cares about itself even as it tolerates being on automatic for long stretches, when that’s OK.

When needed, I can call on the executive, self-evaluating self that gets me up and away, or on and off stage. I can call that identity into the open to give an account of things, as needed. I have a self there (let’s hope).

I can’t tell you why, but this final image to your right gives us a woman of spirit and soul. There’s someone radiant and at home behind those alluring eyes and ironic smile.

A self is a deep anchor, fully there or in the making, with a power to turn off the automatic pilot when more deliberate self-control is needed, or to turn it off in moments of serenity, when solitary reveries of advance or decline or simply living might come knocking in meditation or before sleep.

None of the images are of the girl in question. The images of women are presented for their artistic suggestiveness, and their resemblance to persons living or dead is purely coincidental. All of these images were culled from Google Images, and the identities of the women is not known. 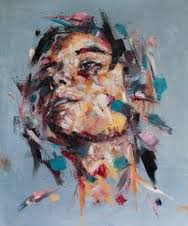 Possible Worlds (Jerusalem-Harvard Lectures), Harvard, 1987. “How can we know the dancer from the dance?” is the last line of Yeats’ “Among School Children.” The painting of a writer at work might be the work of “d Hayman.” The Diagnostic Manual of Mental Disorders fails to cite PDD (it’s my coinage). It describe variations of multiple-personality disorder and of autism. Wikipedia has this to say about “Idiot savants”: “Savant syndrome is a condition in which a person with a mental disability, such as an autism spectrum disorder, demonstrates profound and prodigious capacities or abilities far in excess of what would be considered normal.”