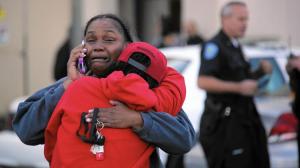 Details are still emerging about the San Bernardino shootings, but evidence mounts that this was terrorism. Public reaction appears to be much more disturbed and fearful than it was a few days earlier when a lone domestic gunman shot people at a Colorado Springs Planned Parenthood office. The extent of the San Bernardino reaction is understandable because it reveals once more a network of organized forces hostile to Americans, impersonally seeking victims in a variety of public settings. The danger seems far greater. But evidence from recent years reveals we are much more at risk from ordinary gun violence than terrorism. Note that the San Bernardino terrorists’ guns were purchased legally just like those of other shooters. If a terrorist or non-terrorist American wants to shoot people, weapons are abundant and easily acquired.

In October, Linda Qiu, for Politifact, did a “fact-check,” comparing data from various sources on US gun deaths and terrorism deaths for the past decade. She found that the total gun deaths were in the range of 300,000 while the number killed in all extremist attacks had been 71. Extending the number to Americans killed throughout the world over a ten-year period, “From 2004 to 2014, 303 Americans were killed in terrorist attacks worldwide, according to State Department reports. During that same time frame, 320,523 Americans were killed because of gun violence.” 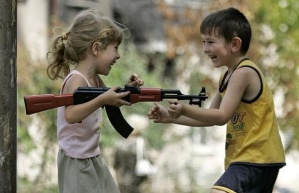 It’s unlikely that New Jersey Governor and Presidential hopeful Chris Christie was thinking of the number of 3- to 6-year-old American children with lethal guns when he pledged to ban Syrian orphans. But Opposing Views has reported that, in the first half of 2013, eleven children in that age group killed themselves or a playmate with a gun they thought was a toy. During that same period, domestic terrorists killed four people with homemade explosives at the Boston Marathon.

“U.S. Leads World in Mass Shootings” the Wall Street Journal reminded us in October. The article cited Adam Lankford, an associate professor at the University of Alabama Department of Criminal Justice, He found that countries with higher rates of gun ownership recorded more mass shooters per capita. The U.S. ranks first in gun ownership per capita, with roughly 270 million firearms, or 89 firearms per 100 residents. Yemen ranks second, with an estimated 55 firearms per 100 residents.

The U.S. represents less than 5% of the 7.3 billion global population but accounted for 31% of global mass shooters during the period from 1966 to 2012, more than any other country, Mr. Lankford told the Journal, noting that the technical definition of a mass shooter is a person who has killed at least four victims at a go. The 90 killers who carried out mass shootings in the U.S. amount to five times as many as the next highest country, the Philippines.

If only stories in newspapers and online—or, say, mass shootings—had any effect on US policies.

In Salon, Heather Digby Parton reminded readers: “Recall that in December of 2001, as Attorney General John Ashcroft was rounding up American and foreign Muslims by the hundreds, he refused to allow the FBI to check records to see if any of them had bought guns.”

The New York Daily News on November 18, 2015 splashed the headline “NRA’S SICK JIHAD” on its front page, blaming the organization for blocking a bill in Congress that would deny those on the government’s no-fly suspected terrorist list the right to buy weapons.

Right on the heels of this came stories about how Texas Representative Tony Dale, who serves on the House Committee on Homeland Security and Public Safety, had sent a letter to his state’s Governor and Texas state leaders warning them that Texas laws would allow newly arrived Syrians to arm themselves almost immediately.

San Bernardino is far from an isolated situation. Since the beginning of 2015, there have been at least 354 reported cases of mass shootings. According to shootingtracker.com these took place in about 220 cities in 47 states.