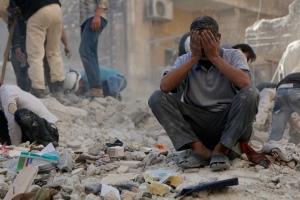 All I can manage this morning is an expression of disgust and despair.

Yesterday morning, half a day or so before news of Paris began to reverberate around the world, the Los Angeles Times published an op-ed piece by Kenneth Roth, the executive director of Human Rights Watch. The piece was about the opening of multilateral talks on Syria, scheduled to begin in Vienna today. Roth’s article expressed concern that the negotiators will set aside the on-going catastrophe affecting Syria’s civilian population until some sort of political resolution can be reached—a resolution bound to be a long time coming, assuming that it comes at all. “Meanwhile,” Roth reminds us,

the slaughter continues, with an estimated quarter of a million dead, 4 million refugees (many headed to Europe), an additional 6 million to 8 million displaced within the country, hundreds of thousands of civilians besieged, thousands more in detention, and suffering as far as the eye can see.

The events in Paris, ghastly as they are, are not the beginning of the horror, nor the worst of it, nor the end of it—not nearly.

The conflagration that sent a small flame leaping into the streets of Paris yesterday has been burning in the Middle East for decades. The black smoke of that blaze has been darkening our sun throughout all this time, while our eyes have grown so accustomed to the altered light that it almost seems as if everything were normal.

This morning I see that President Hollande has announced that this wanton murder of 127 Parisians will not go unavenged. France, he assures us, will visit on the heads of the barbarian perpetrators a “merciless” response. One can only imagine how many civilian heads will be proud to witness that noble redress. This very second the civilian death toll in Syria reached 250,000 plus 1—maybe. Who’s counting?

Link: If no quick end to the war in Syria can be found, at least protect the civilians, Kenneth Roth, Los Angeles Times, November 13, 2015.