This morning light rain falls, winds ruffle the trees, birds frantically peck at my feeder. If I add a swath of green visible from my balcony, and notice the moist air enveloping the room, I begin to feel taken up, lifted by this fabric of things that shape and animate my morning and so animate me. 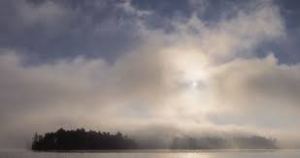 My immediate surround is something like the weather, except it includes more than mists and winds — birds, grass, trees, the discrete pace of walkers barely visible off there. I’m lifted, right now, by a skein of immediate presences, however hard it is to catalog the scene, or name the box they all fall in. This is where I live and breath and have my being.

I live in a setting that’s infinitely divisible into multiple focal points of meaning — to be seen or heard or sensed. Drenched in an atmosphere that includes the presence of antic birds or ruffled trees, I savor neither objects nor their attributes. Weather does not have wind among its attributes.  I savor presences both elusive and striking. Can I say more about what they are?

We are all ill-equipped to name them. They seem sui generis. Like dreams and memories, they are enormously powerful and also enormously difficult to pin down without poetry, impressionistic intimation, passionate witness or acclamation.  With only a bit of insistence, I’ll just proclaim that I’m incarnate among them.

The great Galileo would disagree. He writes that these mysterious “things” are not mysterious aspects of the world but merely sensations in my body — in my head.

I think that these tastes, odors, colors, etc., on the side of the object in which they seem to exist are nothing else than mere names, but hold their residence solely in the sensitive body.

So the greenness of a lawn or the mists hanging over it are not out there where they seem to be. He doesn’t give us help with the antics of birds or the murmur of trees in the wind. And he has nothing to say about dreams and memories. Mists, memories, and dreams deliver experiences. They can’t be “names” buzzing merely “in the sensitive body.”

You may wonder where I’m going with all this. Well, I’m struck that the murmur of trees or the terror of dreams or the memory of a concert or a meal are, despite their elusive “ontological status,” vastly important to the rich quality of my life. They are the quality of my life, the life I enjoy. Yet I’m massively ignorant about how presences attach to, or animate, my world. That’s the first point.

The second is that I’ve come to resent the commonplace devaluation caught in Galileo’s quip that they’re just “names” (that is, unreal) residing “in my head” (“in my sensitive body”). They’re not that at all.  They’re not in the first instance part of my brain or my body. I’ll leave the murmur of trees and the quiet of mist “out there” in the world, if you please, and declare them as real as anything can be in the world.

I’m lifted by a skein of immediate presences. This is where I live and breath and have my being.

In a strange way I’m ready to have dreams and memories migrate “out there,” too. After all, as soon as I share them with others or record them in diaries they acquire public weight. They’re hovering presences for others to respond to, and for me to respond to weeks after their initial appearance.

Perhaps they are experiences of aesthetic features of the world. But then “aesthetics” has to mean far more than the world of fine or commonplace art. It has to be complex and wide enough to include the lilt of the wind, the musk of blue cheese, the terror of a dream, and the silence of an abused child.

Lilts, the smell of brie, silence, and night terrors get recounted, articulated, preserved and inherited in cultures, so they must belong to a sphere of culture. But which one? It’s surely not the political, and not the moral or ethical, and not obviously the religious. So maybe dreams and whiffs of brie by default land in the sphere of aesthetics — or something as philosophically august as a phenomenologist’s “lived world.” They are surely not “mere names” for unreal things.

Let’s say an aesthetics capaciously construed makes the world richer and abundant. It’s not to be condescendingly dismissed as a buzz in my head. Furthermore, what’s wrong with passionate witness or poetic intimation as ways we give each other access to our worlds? There’s another path than traipsing through Galileo’s workshop of weights and measures.

Credits: The allusion to the silence of an abused child, and the quote from Galileo, are thanks to William Eaton’s essay, Zeteo 06.25.2015, “Morandi, Bonnard, and Silences Within.” See also Tucker Cox, Zeteo  05.22.2014, “Wildlife and bird songs, trees and eternal fires.”