I had the pleasure this week of visiting the Leonardo da Vinci exhibition at The Boston Museum of Fine Arts. I hadn’t been in the museum since the addition of a magnificent new wing – a light steel and glass edifice, in places nearly transparent. It contrasts robustly with the gathering steps, fluted pillars, pediment, and tympanum of the original early twentieth century neoclassical building. Inside the new wing, the three-storied walls of glass in the restaurant area allow sunlight to enter, and also allow in the waving greenery of trees and low-lying gardens just outside. It was hard not be struck by the contrasts — pure glass and it silvery supports set against an arbor of lilting green.

At the entrance to the Leonardo exhibition a tastefully lettered quote was floated against the wall, dominating the quite small drawings lined up at eye level for viewing, leisurely separated, one from the next. The quote, from Leonardo’s Treatise on Painting, has everything to do with the impact of contrasts:

The more the figures are contrasted, the deformed opposed to the beautiful, the old to the young, the strong to the feeble, the more the picture will please and be admired. These different characters, contrasted with each other, will increase the beauty of the whole.

The idea seems both commonplace and obscure – perhaps eliciting, in my mind, the contrast between the expectation that beauty, truth (and goodness) should be clear as a bell, transparent, and the contrasting conviction that truth, goodness, and beauty are cleft, riven, dark and jumbled. 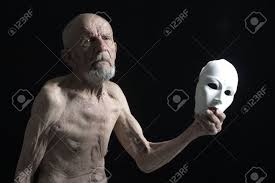 Of course, Leonardo is describing a drawing with more than one figure. A beggar will stand out more dramatically when next to a king. A child, be more fetching when held by an adult. The contrasts enhance the beauty of the ensemble. Yet I like to hear Leonardo’s remark as saying something about the clarity and opacity not just of a drawing containing contrasting human figures but about reality itself as it flows past.

Philosophy hopes for a transparent reality that has a stable structure. Thus I remember being both amazed and puzzled as Thoreau described a hawk spinning and diving and rising above again in what he calls “the most ethereal sight I had ever witnessed” — and then he enters a second dance figure, abruptly beginning to look at fish at his feet, as if the hawk had never existed (or lives on only as a dim memory). Half a page later he enters a third dance or narrative sequence, describing the stinking corpse of a horse.

These contrasts appear temporally, not among figures in a drawing. If we collapse these three phases of Thoreauvian reality – angelic sky, flowing fish, fetid flesh– into a single frame, what do we have? Is the impact of each accentuated by the impact of the other two – hawk-angel, fish, and rotting flesh forming an odd trinity? Or does each cancel the other two, erasing the board completely. Perhaps we are left with amorphous confusion.

What if our best portraits of reality let the extraordinary, the banal, and the mildly interesting, the high, the low and the mid-level, the good, the bad and the ugly, somehow cohere in a dynamic reality that is partially but not fully intelligible — perhaps in an unfolding and incomplete narrative of anomalous contrasts.

If so, our persistent questions – but is it banal or sublime, tall or short, opaque or transparent, good or bad – will find only

tenuous purchase. Here to the right — a contrast of stunning regalia and silly, giggling kids. And to the left (so still), a face of unfathomably gentle beauty.

We may be gripped by episodes of the real – amazed or horrified, swept away or swept under. Art and the real will have impact (as they should). But our attempt to describe such moments in terms of simple contrasts will fail — the naked and silly opposed to the powerfully decked out, the deformed opposed to the beautiful, the old to the young, the strong to the feeble. We mention one and we realize we’ve left out the insistent others, the insistent opposites, that give the first its bite. And if we pull the two together, stability disappears.