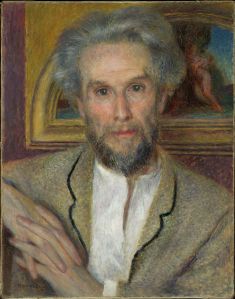 Harvard’s Fogg Museum does not think of itself as “portrait gallery”—it includes more than “just” portraits. Nonetheless, I am prepared to make the following, likely unprovable, assertion: The percentage of wonderful portraits to total number of artworks on display is greater at the Fogg than at any other museum in the world.

Among my favorites is Renoir’s Victor Chocquet, shown at right. Renoir’s reputation as an Impressionist painter is rather in decline. His bathers, for example, have come to seem kitsch, vulgar, academic. Their nudity notwithstanding, they are not wearing well. And, more generally, Renoir’s reputation has hardly been aided by the shift from Romantic visions of art and of the Impressionists to more political and gender-sensitive readings. Writes art historian James Rubin, Renoir’s

conception of art was in tune with prescribed gender roles of the time: the pleasures proferred by paint are compatible to those provided by women. . . . The gendered economics of consumption and sexuality are inseparable when a woman is the object of the desiring male gaze.

All this can be thought of as also giving us an opportunity to appreciate what a great portrait painter Renoir was and to reflect on the roots of this greatness.

When last I visited the Fogg, it had three of his portraits on display, one of them a self-portrait. To my eye and heart that particular portrait (one of several portraits by Renoir and others) of the Paris art collector Victor Chocquet is the greatest of the Fogg’s Renior collection. This because it so embodies the great talent that Renoir brought to portrait painting: love. One of the Fogg’s other Renoir portraits, a portrait of his long-time nanny, housekeeper, model, companion Gabrielle Renard is also full love, but less intensely than the Chocquet portrait. (I must also note, sadly, yet vitally, that the electronic reproduction of the Chocquet portrait fails to convey its most essential characteristic—again, love. We miss the feeling of the paint, and thus of the painter, on the canvas.)

John Rewald’s once central and certainly Romantic History of Impressionism has a good deal to say about the sources of the love found in the Chocquet portrait:

A modest chief supervisor in the customs administration, Chocquet had the spirit of the true collector, preferring to make his discoveries for himself, taking as his guide only his own taste and pleasure, never thinking of speculation, and wholly uninterested in what others did or thought. Although his resources were limited, he had lovingly brought together through the years a collection of works by Delacroix. . . . Having detected in Renoir’s canvases certain qualities that reminded him of his idol, he wrote to him [after an 1875 sale of Impressionist paintings at which Renior’s work had obtained the lowest prices].

Several of the paintings had to be bought back by Renoir himself. Yet Chocquet wanted Renoir to paint a portrait of his wife sitting in front of a Delacroix painting. “I want to have you together, you and Delacroix,” he said.

We might ask how a painter gets love (or is it, in this case, gratitude?) into a painting. My (Romantic) sense is that there can be nothing deliberate about this. Certainly there are contrived aspects of the Chocquet portrait—the painting in the background, the long, slim, pale fingers of an aficionado. But the love is in the face, in what seems to be the devotion of a warm and simple soul to finding the warmth and simplicity of another human being. (Interestingly, this love seems quite lacking in Renoir’s paintings of bathers or in such famous works as Le déjeuner des canotiers, The Luncheon of the Boating Party.)

I always remember my first creative-writing teacher telling me that a novel has only one character: the authorial voice. Renoir’s portraits may be said to have for their subject his love, perhaps for the particular people he painted and certainly for painting as well. And thus, more generally, Renoir’s portraits speak to us about what love is or can be. Gratitude seems a large part of it in Renoir’s case.

While trying to keep myself from writing a much longer piece about all my favorites in the Fogg collection, I will note a few of the other portraits that exemplify what Renior was not doing, and thus may help us appreciate the nature of his particular work. Were Jacques-Louis David’s portrait of his friend Emmanuel-Joseph Sieyès hung next to Renoir’s Chocquet we might powerfully feel the difference between friendship and love. Other portraits of political leaders—David’s Napoleon (at right), Gilbert Stuart’s George Washington, Joseph Siffred Duplessis’s Ben Franklin—get involved in propaganda and also, perhaps, satire. There is the subject working to be perceived in a certain way by the public and perhaps ruminating (off-stage, as it were) about the nascent phenomenon of celebrity, and there are at least intimations—greater or lesser in the various portraits—of the artist seeking to call this enterprise into question. Among the twentieth-century portraits there are several—by Giacometti, Picasso, and Max Beckman, for example—that use a mannered style to, as it were, hit us on the head with either their sitter’s personality or the artist’s originality.

Were I a painter, my work might have less in common with Renior (or Picasso, Stuart, et al.) than with the tunneling, let’s call it, of Thomas Eakins’s portrait of Alice Kurtz, a rich young American. (See below.) The Fogg’s text accompanying this portrait states that the sitter’s wealthy father “was displeased with the picture, complaining that Eakins had reduced his healthy and athletic daughter to ‘a bag of bones, an anatomical sketch.’” In a way this comment seems completely off; the portrait shows few bones and is hardly a sketch. And yet we can understand the father’s complaint. The painter has sketched, in the sense of proposed, something of the insides of this young woman (or of a projection of Eakins onto her). The bones here are above all psychological—a sadness, a pensiveness, an ambivalence. (And this ambivalence has its superficial side, too, in the image’s androgyny—the manly tautness and rectangularity; the grayishness around her mouth as if from facial hair; and a feminine softness, the eyes watering as if toward tears.) 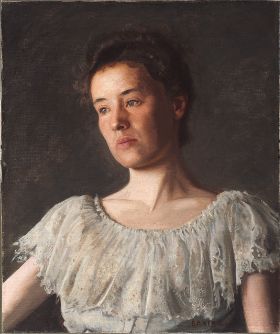 Renoir, I am proposing, did not get caught up in any of this. Some will say that this speaks to his limitations. His reputation is now dogged by various quotations (or English renderings) such as “I paint with my prick” and, “When I’ve painted a woman’s bottom so that I want to touch it, then it is finished.”

There is a more traditional French expression: “Bête comme un peintre.” Stupid as a painter. The English expression “crazy like a fox” is not all that different. The painter described by the French expression may not be capable of or involved in analysis, contextualizing, satirizing, advocating and so forth; he just paints. And this is what’s so wonderful about him (or her).

Along these lines, I will close with another passage from Rewald’s History of Impressionism. Renior, he writes,

knew nothing of Manet’s ambition and hurt pride because he had neither ambition nor pride. He was spared Cézanne’s burning doubt and Monet’s bitter struggles, the self-consciousness of Degas and the solemn eagerness of Bazille, because he was neither introspective nor an introvert; in spite of his utter poverty he was carefree and gay because he found complete happiness in his work. . . . [H]e painted for his own enjoyment, and his pleasure amply justified the various styles which he took up as enthusiastically as he dropped them. Even if a work did not fulfill his expectations, no minute ever seemed lost to him if spent with brushes and paints.

This, too, is love. Great love.

John Rewald. The History of Impressionism

My mother lived near Harvard Square and, as a result of her long illness and then death this past September, I have lately spent a good deal of time in the Fogg. Recently I wrote another Zeteo piece about a Kiki Smith sculpture in the museum’s collection. See Urine, glass beads, poetry.

John Rewald’s book is also mentioned at the tail end of an essay on Balthus at the Met, Montaigbakhtinian, November 2013. Sabine Rewald, John’s daughter-in-law, is a Balthus expert and curated the Met show.