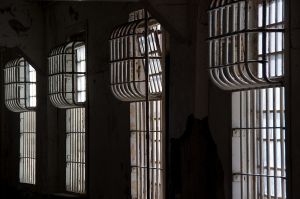 Poetry bears witness to events that surround it, sure. But it is not the news. It is not an opinion column either. It dips its slippery toe into telling, showing, and expressing so as to permit each reader to recreate the very event over and over anew and on a personal basis.

Such a feat is perhaps simpler to accomplish when the events in question are household, such as a divorce, a child, aging. But when the event relates to the fate of political prisoners held captive by a ruthless dictatorship, generating personal connections with a poem is more difficult.

But, for Carolyn Forché (b. 1950) the task seems easy. Her book “The Country Between Us (1981),” published thanks to Margaret Atwood’s helping hand, shares her experiences as a human rights worker during El Salvador’s dictatorship in the 1970’s. It won numerous prizes, including the Poetry Society of America’s Alice Fay di Castagnola Award, and was also the Lamont Poetry Selection of the Academy of American Poets.

Below is a short poem from the book, one of my favorite. I have a soft spot for short poems with a punch, and this one is precisely that. I love how specific it is to one man’s plight, but still transmits a sense of hope and gentleness that is very much the author’s, yet very much the world’s.

In Spanish he whispers there is no time left.
It is the sound of scythes arcing in wheat,
the ache of some field song in Salvador.
The wind along the prison, cautious
as Francisco’s hands on the inside, touching
the walls as he walks, it is his wife’s breath
slipping into his cell each night while he
imagines his hand to be hers. It is a small country.
There is nothing one man will not do to another.