How do we access Beth Lipman’s phantasmagoric sculpture, Laid (Time-) Table with Cycads, with its profusion of familiar material objects and organic matter all made of clear, sparkling, crystal-like glass? We recognize immediately its alignment with the tradition of still lifes. But, look again, and notice that most of the perfectly crafted pieces are broken and spilling over the sides of a long, traditional-looking wooden table painted a stark white. Unlike paintings of still lifes, this conglomeration of objects continues under the table with an equal profusion of plants like some kind of ancient, tropical landscape. The handmade and the organic are joined in composition, as if united in ruin and decay.

Lipman references the abundant still lifes of the seventeenth-century Dutch. According to Norman Bryson, in Looking at the Overlooked: 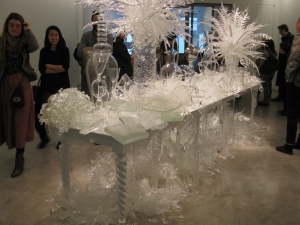 The first European society to experience the problem of massive oversupply is that of the Netherlands, in the period of its ascendancy from 1608 (when the Netherlands broke from Spanish rule) until the late 1660s, when the commercial edge began to be lost to rival powers . . .

Dutch still lifes during this period illustrate imported food, fruits, flowers, exotic tropical birds, and insects in gorgeous banquet displays of wealth and, just as important, the skill of painters. Still life compositions were no longer restricted by the rhythm of seasons. The Dutch prided artifice over nature and painters gathered together specimens from different seasons.

Our first response to Lipman’s sculpture is awe at her seemingly inconceivable skill with glass. This is not unlike our reaction to the extraordinary skill of the Dutch still life painters. If I had to make a choice of my favorite genre of painting, I would have to say still lifes. Over the years I have thought about our attraction to these displays of objects and the impossible skill of painting. Objects—now more manufactured than natural—surround us. We are drawn to the familiar. But it’s the color that is, I think, the lure of these works—colors that represent the entire spectrum—from primary to secondary and, in some cases, tertiary.  We respond intuitively to the perfect balance, wholeness of color that are found in most still lifes. The complete range of colors innately appeals to our sense of literally being alive and trumps the warning of impending death in the tradition of the genre. Color and the desire for immortality are intertwined with death.

I had the opportunity to observe a cadaver that was being dissected in a medical school lab. The one impression that has never left me was the realization that a lifeless body is without color. We expect flesh and organs to be various shades of red from the blood that is oxygenated by the lungs, pumped throughout the body by the heart and extends to every part.  I was not prepared for the grey, colorless look of death.

Lipman heaps objects on top of objects with the obsession of the hoarder. And we are misled by the sheer beauty and fragility of the glass that we almost do not notice that this accumulation of materials has broken down and is in a state of collapse. Nature is ready to grow over the mess and survive. Colorlessness is the clearest sign of death.

For the story of the Dutch in the seventeenth century, see Simon Schama’s The Embarrassment of Riches: An Interpretation of Dutch Culture in the Golden Age. First Vintage Books Edition, 1997.