Exhibiting contemporary art has not been a simple enterprise since about or before the 80s when the possibilities of what could be art became anything. We wait in anticipation to see if the new 422 million dollar version of the downtown Whitney will succeed in its new location at the foot of the High Line.  (So far the reviews are positive.) Will the trendy meatpacking district with Hudson River view be the answer to pack the Whitney with tourists? Artists and curators were never able to successfully compete with or subdue the massive sculptural presence of Marcel Breuer’s Whitney on Madison Avenue. 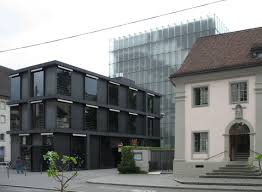 I have had the opportunity to visit Kunsthaus Bregenz (called KUB) twice—in 1999 and again this year. Built in 1990-97 by Pritzker Prize winning Swiss-architect Peter Zumthor, the Kunsthaus is, I think, the perfect combination of proportions, materials, and atmosphere that allows the art to breath and the visitor to feel transfixed and absorbed in a space distinct from the outside. Located, like a ghostly presence, in a small town in Austria near the shore of Lake Constance (the Bodensee), it’s not on every tourist map but for a lover of art and architecture a worthy destination and conveniently within a few blocks of the train station. Its cubic-minimalist form has a skin of 712 etched-glass panels that are held together by metal clips and attached to a steel framework. This freestanding façade allows light to flow into the galleries and cover the ceilings. At night the glass panels become transparent and one can see the outline of the interior structure. In contrast to the fragile glass exterior, the interior, floors, walls, and stairs, are unpainted concrete. Artists are invited to exhibit works specifically made for this cocoon-like space.

On the ground floor, with a modest admission desk along one side (no shop in sight!), is a space called the Arena for works that play with and off the architecture. When I visited, the designers, architects Trix and Robert Haussmann had installed lights with mirrors on the diagonal in opposition to the dominant squared-shapes of the building. The exhibit is called Reflection and Transparency.

The Zurich team have been questioning the modernist doctrine of continually inventing the new. . . . By employing illusionism as a means of material alienation and through the optical dissolution of volume through mirroring, they create complex, illusionary, apparently infinite spaces, . . . which humorously undermine the canonization of concepts of value and order.

Exhibitions in the main galleries above are usually by a single artist who has been invited to create work for the space. This spring German artist Rosemarie Trockel’s exhibition, Märzôschnee ûnd Wiebôweh sand am Môargô niana më, was inspired by the Kunsthaus in its local context. The title, translated “Snow in March, labor pain at birth are gone the next morning”, is a phrase of Austrian slang.

There are only a few artists like Rosemarie Trockel, whose works have always been able to retain their ambiguity in the face of great popularity. In a career spanning more than 30 years, . . . the artist has succeeded in creating new work complexes, objects and images that are continually surprising. . . . The cryptic character of this title in Vorarlberg vernacular consciously creates connections to the region, as do some of the exhibits, which were a result of the artist’s sojourn in the area. 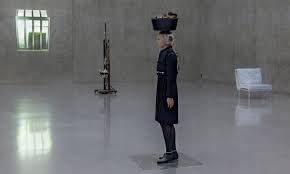 A life-size blond mannequin stands in the middle of one gallery floor dressed in the black uniform commonly worn by members of a local association in parades. The figure is titled, The Critic, a humorous reference to the uniformity of contemporary criticism. In a strange way, the figure holds sway over the entire floor, ubiquitous and unsettling. In the background of this photo one can see another work—the sky light of an artist’s studio with a cob-webbed covered, paint-spattered old easel. It is Trockel’s contention, as told to the curator on the audio guide, that painting is dead.

Arranged in a carefully aligned collection, her “painted” minimal-abstract works (with reference to the paintings of Agnes Martin and Bridget Riley) are made by tightly stringing colored acrylic yarn for a group she refers to as the colors of the 2010s. 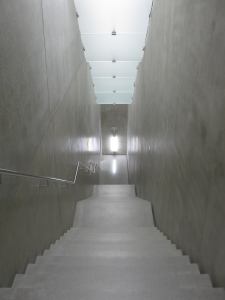 Her most effective sculpture was placed at the bottom of one of the dramatic stairways, which run straight up and down one side of the building. Called Spiral Betty, it pays homage to gender issues and the “genius” male artists of the minimalist period, Robert Smithson and his famous earthwork Spiral Jetty of Salt Lake, and the neon-light sculptures of Dan Flavin. Trockel’s sculpture is in the shape of an IUD coil with a “tail” of neon light. Situated in the womb-like enclosed space of the stairwell that is, at the same time, phallic in its narrow extended space, Spiral Betty is the perfect send-up of a male dominated period of art. 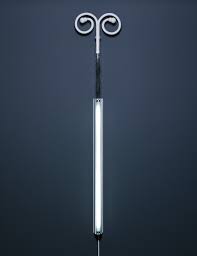 Photos of Reflection and Transparency and Spiral Betty in the Stairwell by the author. Other photographs from Google Images.

Thank you to my friend and devoted supporter of contemporary art, Maren Hensler, for taking me to Kunsthaus Bregenz.