This post juxtaposes brief notes with reproductions of five women-focused works at Chicago’s Art Institute. Readers are invited to make whatever connections they will and draw whatever conclusions they might between the art works, which seem to me unified only in their focus on women, in the genius of their making (by men, by the way), and by their co-existence in one Chicago institution.

I would also note that these works are not unified even in their reproducibility. Three of these works are sculptures, and in two of these cases the photographs of the works are quite evocative and representative. But the two paintings lose a good deal of their power and depth in photographic reproduction, and the Baga headdress seems a fish out of water.

Figure of a Woman in Ceremonial Dress: c. 9th century; from near modernday Veracruz, Mexico

At a lecture at the Pratt Institute in Brooklyn, I recently heard the film theorist Laura Mulvey say that “a photograph always shows more than the photographer can realize.” We might say that with our acts of pointing—of calling attention, of proposing priorities, things to look at, directions in which to head—we are always asserting and revealing more than we can realize. It is certainly also the case that, as contexts shift, as works of art are transported, say, across a span of more than a thousand years, from the shores of the Gulf of Mexico to the shores of Lake Michigan, they become, inevitably, more polyphonic than they were in their original time and place.

Music is rarely didactic, and it would be nice if from time to time non-narrative texts slipped away from preaching, teaching, explaining, and advocating. This post is one in what is becoming a quite extensive series of Zeteo is Reading and Zeteo is Looking and Listening posts. In the initial conception, these moments in cyberspace were to bear a relation to strolling in a park (or in a museum or among the many texts of our daily lives). The primary, or even sole, task of the writer was to notice and call attention. Walking in a park with a friend, something—a bird—catches your eye or ear, and likely you are pointing it out before you have begun to even wonder why you find it of interest.

Roland Barthes once proposed that philosophy was becoming, or was most properly, an autobiography of the thoughts of the thinker. This statement can be put in contexts, too. Insofar as we embrace relativism and skepticism, and insofar as our minds do not turn off (as many minds these days do?)—what are we going to assert? In what directions are we going to urge people to follow their thoughts, and with what hopes, what justification? For example, we might seek simply to record as accurately as possible our own thought processes. But paradox is everywhere; to assert that seeking to create such a record is a legitimate endeavor, and to introduce a concept such as “accurately”—this is to erect bulwarks, however incidental, against relativism and skepticism. To pluck a phrase from Sartre: « mes actes font lever des valeurs comme des perdrix ». My acts make values spring up like partridges.

Entering the Art Institute on March 15, 2015, I thought to go first to the African art gallery, but it was all the way down a long side corridor, and I got lost or distracted by a room of sculptures from India. Many of these were made of a rose-hued sandstone, and there was a sense that this material alone expressed an idea about femininity or maternality. I confess that I was also struck by how several of the sculptures featured stylized (or artificial), large, upheld breasts. It was hard (impossible) not to make connections to the contemporary United States—to a rampant obsession with stylized (or artificial), large, upheld breasts. As this is not one of my particular obsessions, I wonder where it comes from. Certainly the Yogini Hayagriva (below) is full of love, and there is love (or different kinds of love) in her breasts, face, and crotch. But a capacity for love does not seem to a feature of our pin-up models, cleavage-ballooning entertainers, and so forth. Far from the Yogini, we seem imprisoned in a cocktail of irresistible palpability, religious prohibitions, and sexual harassment. 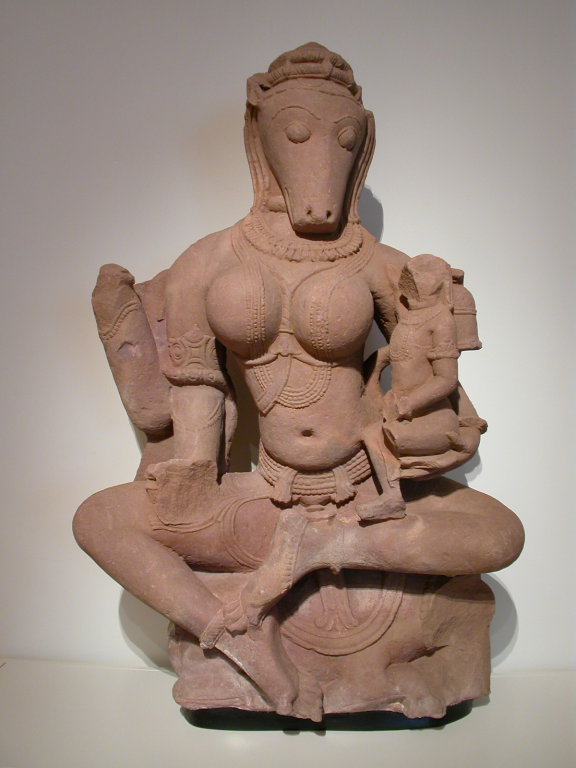 Dichotomizers have manifold opportunities to call attention to the world’s divisions. Another that I have in mind is between the horizontal and the vertical. There are, for example, databases—e.g. Google Images—that allow us to see whole clusters of data (“Art Institute of Chicago”) all at once, and other databases, the vertical, that lead us through a series of steps (Art Institute . . . Indian art . . . sculpture . . . women . . . with animal heads) before we get to that one long-sought piece of data (or image). Similarly we may say that for some people the world is a fabric (which, as Quine said, “impinges on experience only along the edges”). And there are other people for whom the world is a well—only by digging deep do you ever find water.

At the Art Institute I found myself in a kind of dialogue, going back and forth between non-European galleries (Indian, Indonesian, pre-Columbian, and African art) and the Art Institute’s plentiful collection of European art from the first half of the twentieth century. Certainly the dialogue began as a horizontal activity, and it never dug that deep, but increasingly I was drawn, by some kind of thirst, to just a very few works. (I.e. to those displayed in this post.)

Most museums encourage horizontally, insofar as their layouts move us from work to work and encourage us to glimpse dozens of masterpieces in a single day. I have heard of exhibits for the blind that allow visitors to feel the works or reproductions of them, and I would love to come across a museum exhibit that put individual works alone in quiet rooms where viewers might spend time with them, instead of the usual quick glance, reading of the label, moving on. I don’t know that these quiet rooms would encourage verticality, but we would get to know a few art works in a different way.

In the case of Balthus’s great Solitaire, you might say that the work demands extra time, even if we refuse or are unable to give it. And in the cases of the pre-Columbian, African, and Indian sculptures, we might be happy to be spending more time with them. But in this regard Miró’s woman stands out as an exception. Again, I note that, in being photographically reproduced, the work loses some of its weight. In the low lighting of the small, windowless museum corridor where the painting is hung, our attention may be grabbed, and we may quickly “get” what Miró is up to. Our appreciation for Surrealism may increase. And yet we may be happy, too, not to have to look too long or think too much? 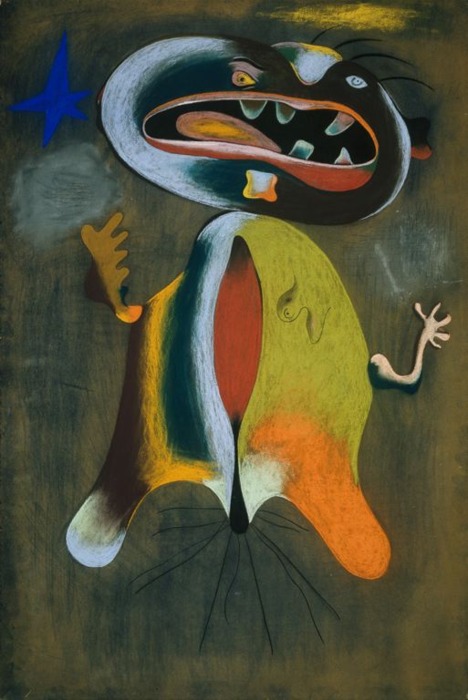 It has been called to my attention that the Metropolitan Museum in New York has temporarily given Tullio Lombardo’s fifteenth-century sculpture Adam its own room. In 2002, the sculpture’s base gave way and the piece was shattered into pieces. Restored, it may now be observed in the round in its own private, dimly lit room on the first floor of the museum. Unfortunately, the room has no seating, and thus encourages moving on rather than spending time with the piece, and electronic screens set in the walls distract from the viewing experience in the name of giving information.

Willard Van Orman Quine’s phrase appears in his well-known essay, “Empiricism Without the Dogmas” (published in the Philosophical Review, January 1951). I spent more time with Quine’s idea in Moscow to the End of the Line, Agni, 2004.

More on Balthus at Balthus at the MET in New York, Montaigbakhtinian, 2014.

More on Dichotomizing from Montaigbakhtinian, 2012.