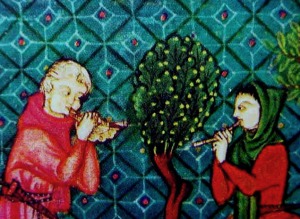 One of my favorite blogs is called “Interesting Literature.” It is just that, a site with interesting, often very random, facts about literature and literary history.

A few weeks ago they published a piece called “10 Short Medieval Poems Everyone Should Read.” Fear not. The poems included  are only a few lines long and translation is provided, so they are very easy to read.

Sure, the poems’ subject matter may seem simplistic, almost pre-adolescently romantic. But it is nevertheless fascinating to have such a direct view into the evolution of language and human expression and interaction.

Say me, wight in the brom,
Teche me how I shal don
That min housëbondë
Me lovien woldë.’

According to the site:

‘Say me, wight in the brom’ is perhaps something of a controversial poem – it effectively features a woman asking a mysterious figure (or ‘wight’) how she can get her husband to love her, only to be told, ‘hold your tongue, and you’ll get what you want.’ Charming.

Regardless of the subject matter, I was fascinated to learn that ‘husband’ comes from “housëbondë,” which is clearly a composition of ‘house’ and ‘bond.’ It all makes sense now.