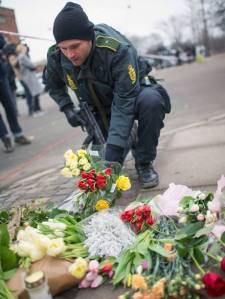 (Warning: The above video depicts or describes the murder of several individuals, including children.)

The recent shooting in Copenhagen, like most terrorist acts, was reprehensible, unforgivable, ineffective, and immature. At the same time, holding a free speech conference in Copenhagen seems somewhat masturbatory. According to the Committee To Protect Journalists, no Danish journalists have been killed since at least 1992; whereas the most deadly country in the world for journalists in the last two decades has been Iraq, with Syria in distant second place. By far the most common beats covered by these murdered journalists were “politics” and “war.” (Denmark, lest we forget, took part in the recent wars against Afghanistan, Iraq, and Libya, and is currently involved in bombing Iraq again.)

If European and American citizens are truly concerned with free speech, perhaps their energies might better be spent holding conferences on how to stop wars and coups. If business as usual ground to a halt in response to every politically motivated murder the way it has with the Copenhagen shooting and Charlie Hedbo massacre, foreign interventions might lose both their profitability and political feasibility.