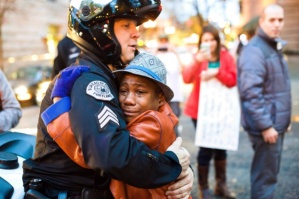 If a tree falls in a forest and six different news channels capture footage of it, does it matter?

The Internet has changed, ever so slightly, the definition of mass media. Major networks still create most of it. Now, however, anybody has the potential to create iconic images if they get enough retweets and ‘Likes’ on Facebook.

Recently, a photo of a crying Afro-American boy embracing a compassionate, Euro-American cop at a Ferguson solidarity protest in Portland, Oregon has gone viral, typically accompanied with the hashtag #Ferguson.

Lest we forget that this image is not the single, defining image of race and state/civilian relations of our generation, an alt-media campaign has tried to discredit the photo as being “staged,” “cropped,” and “a blatant lie.” The photo, it turns out, was cropped, removing the other photographers surrounding the subjects. Far from making the picture “a blatant lie,” however, its blatant staged-ness is what makes it so typical of a small, non-violent demonstration in a major urban area.

In my experience at Occupy Wall Street and the Ferguson solidarity marches, I’ve consistently observed tiny cliques of protesters eschew solidarity to lead marches to locations—such as the Brooklyn Bridge and the Lincoln Tunnel—that would result in arrests, in order to be captured on film and distributed to a mass audience. Urban rebellion, in its incipient, recruiting stage, is primarily theatrical, or “staged.” I am often overly-critical of such actions, believing that demonstrators should generally stick to one location—such as Tahrir Square—in order to manifest a crowd large enough that the major media networks will have no choice but to cover it, or a movement so enormous that major media networks refuse to cover it for fear of contributing to the downfall of the system that enables them. On the other hand, I recognize that these staged encounters of demonstrators that are often outnumbered by the police and media are less a tactical failure by the demonstrators, and more a desperate attempt to ignite a mass movement where there currently is none. Which brings me to my final point:

The photo of the boy and the cop is apropos, but not of Ferguson: of Portland, Oregon. The current situation in Ferguson is unique not because Mike Brown’s death was particularly atrocious compared to those of Trayvon Martin, Oscar Grant, Sean Bell, Eric Garner, etc.; nor was Mike Brown more virginal in life than these other black boys and men. The situation in Ferguson is primarily noteworthy due to the people of Ferguson, a usually sleepy community of 20,000, who have over the last three months launched one of the most successful rebellions against civil, white-supremacist, American society in the past few decades. Despite their distance from the nation’s capital, NBC’s national headquarters, strategic oil pipelines, or even the St. Louis Arch, the people of Ferguson have organized and sustained their mobilization with precious few resources, little help—proportionally—from the outside world, and without the kind of media coverage enjoyed by most demonstrations in major urban areas, which tend to end at

sundown when the cameras go home.

I’m sure the demonstrators in Ferguson appreciate our solidarity demonstrations. Still, when photographers have to strategically angle themselves in order to not give away the fact that there are more people photographing the demonstration than taking part in it, perhaps those being photographed should recognize that they are giving the media exactly what they want. Or perhaps those anonymous figures in the crowd should recognize that their leaders might enjoy the limelight a little more than the solidarity.