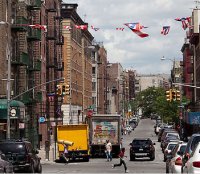 Last morning, as I skimmed through my favorite books, I bumped into Marjorie Orellana’s Translating Childhoods: Immigrant Youth, Language, and Culture. I had not picked up the book since last year, but it was easy to remember why I like it so much. While speaking mostly about children’s work as translators for their monolingual parents, Orellana also dedicates a brief section to Immigrant Childhoods. She begins this section by explaining:

Immigrant families differ from those who have resided in the United States for generations on dimensions that certainly matter for children’s experiences of growing up. For one, these families operate with an overt point of comparison—what life was like ‘back home.’ 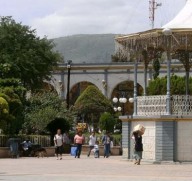 Orellana recognizes immigrant parents’ influence on their children by looking at the comparisons they make. She then takes the idea a step further by explaining how “life back home” can become a strong fantasy for children, even before they visit these places:

[Life ‘back home’] may be an explicit reference point for children and an ongoing one for families who are able to travel back and forth between the two countries, but even if children do not visit their homeland, those places can hold an important space in their imaginations, and ‘home’ is often represented in talk to which children are exposed. Differences between childhoods ‘here’ and ‘there’ may be quite marked to families, and immigrant parents are often keenly aware of the trade-offs involved in their moves.

Orellana’s writing resonates with people who, like me, compare and contrast life in different places. For immigrant parents who grew up outside the US, these distinctions are especially sharp. Perhaps their children will have a better take at negotiating a new kind of childhood that includes the physical and the imaginary in more harmonious ways. 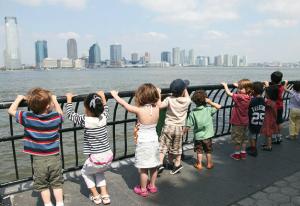 To read more posts in the fields of children and childhood by Alexia Raynal, visit her ZiR page here. For an exploration of children’s lives between two worlds look out for Alexia’s article “Children’s Homeland Trips,” which will be published by Zeteo next week.

The image at the top of the article shows a street in the Bronx, and was published in an article by The New York Times titled University Heights, the Bronx.

The image to the left of the article shows the downtown plaza at Tlapa de Comonfort (in Mexico), and was taken by Matthew Weathers.

The image below the signature is from the National Association for the Education of Young Children.