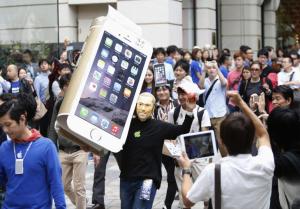 Zeteo’s staff is a mix of the graduate-student aged and the emeritus aged, and this helps me (on the emeritus side) see more clearly where my generation is ending up. At a meeting the other day, one young staff member, whose great interest is participatory democracy, was expressing his hopes voire belief that electronic tools can facilitate a revival of participatory democracy. My sense is rather that we can already see, and will soon see more clearly, how electronic tools have played a large role in further reducing autonomy and, indeed, thinking.

The other day in New York I saw a long line, and I wondered what people could possibly be doing waiting in such a line first thing on a beautiful Monday morning? Were they anxious to apply for some job? No. They were waiting to buy the latest version of an electronic gadget. Our largest “votes” now are as consumers, and these votes are as channeled by money (advertising) as our political votes are.

How far my generation has fallen, from the utopian dreams and experiments of the Sixties, to stagnant incomes, long hours at not very fulfilling jobs we feel lucky to have.

But again, I take these views to be generational—a reflection of how far my generation has fallen, from the unprecedented middle-class prosperity of the post-World-War-Two period, and with it the rise of a vibrant counter-culture in the Fifties and utopian dreams and experiments of the Sixties, to stagnant incomes, to long hours at not very fulfilling jobs that we feel lucky to have, and to a kind of dreamlessness.

All this by way of calling attention to “How Bad Are the Colleges?”, a review by Christopher Benfey in the October 23 New York Review of Books. Benfey, a professor of English, poet, and reviewer, is writing about former Yale professor William Deresiewicz’s Excellent Sheep: The Miseducation of the American Elite and the Way to a Meaningful Life. (Apparently an excerpt from the book in The New Republic— “Don’t Send Your Kid to the Ivy League”—has become the most-read article in the history of that magazine.) A quote from Deresiewicz’s text:

The system manufactures students who are smart and talented and driven, yes, but also anxious, timid, and lost, with little intellectual curiosity and a stunted sense of purpose: trapped in a bubble of privilege, heading meekly in the same direction, great at what they’re doing but with no idea why they’re doing it.

Benfey’s more sober, nuanced response has a lot to be said for it. The line that has stuck in my head is the very last one. I will set it up by putting it in bold and giving the immediately preceding sentences as well. And, again, thanks in part to my younger Zeteo colleagues, I am coming to see such observations as the heartfelt, sad expressions of my particular generation’s view:

Deresiewicz wants, laudably, to instill independence and audacity among students. More colleges with a higher tolerance for risk, for passionate weirdness in curriculum and teaching, might well help our children make a more distinctive world for themselves. How far off such hopes now seem.

William Eaton is the Editor of Zeteo. A collection of his essays, Surviving the Twenty-First Century, will be published by Serving House Books. For more, see Surviving the website.

The photo was found on a Web page of the International Business Times. The caption reads: “A man wearing a mask depicting Apple’s late co-founder, Steve Jobs, holds up a cardboard cutout of Apple’s new iPhone 6, as he walks into the Apple Store at Tokyo’s Omotesando shopping district, Sept. 19, 2014. Reuters.”

Benfey’s review: How Bad Are the Colleges?

Deresiewicz’s Don’t Send Your Kid to the Ivy League

A related piece of my own: Where are our dreams?