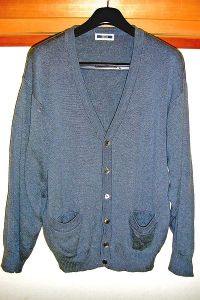 It is always interesting to come across a poem whose structure is just as important to its development as its diction. Such is the case with poet Anne Carson’s piece “Father’s Old Blue Cardigan” below.

The message of the poem is clear and forceful, the more so because its line breaks and verse structure cascade down into the denouement. And in that final line, the work’s major themes of death and childhood are wrung together by the open revelation of a third theme that we’ve sensed all along: terror.

I put it on whenever I come in,
as he did, stamping
the snow from his boots.

I put it on and sit in the dark.
He would not have done this.
Coldness comes paring down from the moonbone in the sky.

His laws were a secret.
But I remember the moment at which I knew
he was going mad inside his laws.

He was standing at the turn of the driveway when I arrived.
He had on the blue cardigan with the buttons done up all the way to the top.
Not only because it was a hot July afternoon

over the haystacks that sweep past
keep shocking him
because he is riding backwards.