In Octavio Paz’s book Essays on Mexican Art, we learn about the childhood experiences that marked Paz’s artistic education.

In order to really “see”, one must compare what one is seeing with what one has seen. Hence seeing is a difficult art: how to compare if one lives in a city without museums or collections of art from all over the world? The traveling exhibitions of great museums are a recent phenomenon: when I was a youngster all we had available were a handful of book s and mediocre reproductions. Neither I nor any of my friends had ever seen a Titian, a Velázquez or a Cézanne. Our knowledge came from books and was verbal.

While he refers to books and stories initially, Paz also recognizes the impact of his surroundings in the development of taste. The mix of eighteenth and nineteenth century architecture, the colonial houses with pink walls, and the tall ash trees from the plaza in the little town where he grew up left a strong impression on him. Along whit these images, there were also the remembrances of the popular fiestas and fireworks displays, when the craft of pyrotechnics was entrusted to certain families during Paz’s childhood.

In Mixcoac the fireworks makers of San Lorenzo were, naturally, the ones entrusted with the holiday skyrocket displays. I still remember, in awestruck wonderment, the inventions they thought up, such as that cascade of silver and gold, one twelfth of December, falling down the facade of the church: water of lift on the stone, a harmless baptism of fire on the towers, and the dark green, almost black, foliage of the ash trees. . . . That was how my apprenticeship began. The first objects I saw were the humble and ill-matched specimens of indigenous art crossed with Spanish, of the Creole- and French-influenced tastes of our grandparents. It wasn’t a bad beginning.

Paz’s delicate narrative resonates with very personal but also shared, popular memories. I have never met a child who, having witnessed the fireworks in her small rural town, does not find herself affected by them. But there’s an observation that is not entirely clear to me. In a brief note that seems almost out of place, Paz adds that “it is often forgotten that the right to elect our authorities includes the freedom to honor, in public and in our own way, our heroes and our divinities.” Is he alluding to the Pereira’s power to determine whom to honor by the selection of their fireworks and the narratives in them? Is he criticizing the hereditary trade of well-establish families of pyrotechnicians in Mexico back then? I can’t find an answer, but Paz’s awareness of the impact of childhood experiences in the development of taste was a pleasing discovery. 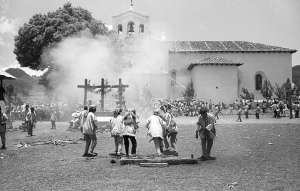 Fiesta of San Lorenzo, exploding fireworks, by Frank Cancian, 1971. Copy digitally reproduced by the University of California at Irvine