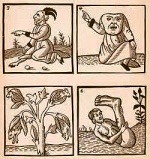 In the canon of travel literature, few books match The Travels of Sir John Mandeville. The tales of his journey are the tallest, many pure fantasy. His book – also called The Book of Marvels and Travels – was one of “the most popular in Medieval Europe.,” available in English, Latin, French, German, and other tongues. Few scholars believe Mandeville existed. All have speculated on the author’s true identity. No one knows for sure.

Nonetheless, Travels is a sine qua non of guidebooks. Written in the 1350s, it has a everything to delight an armchair traveler of the Dark Ages. “Mandeville” records sights seen during a thirty-four year tour of virtually all of the known and much of the unknown world. True to the Age, his journey begins with a pilgrimage to the Holy Land. There, his itinerary and experiences – seeing, touching and kissing holy stones – mirrors activities of today’s faithful.

Each destination has its outstanding attraction. There is the “Soldan” (Sultan) of Egypt’s absolute power and the transformation of the Phoenix at a temple in Heliopolis, just north of Cairo. “Mandeville” sees monsters, cannibals, pygmies and humans with heads below their shoulders (see drawing). He gives us “simple curiosities, histories, customs, religions and legends” of each stop on his itinerary. On the Island of Java (Indonesia), he discovers a tree that “bears meal, honey, wine and venom.” He meets a “Great Khan” in China. He even visits the legendary, Christian paradise of Prester John, an island somewhere near India. A highlight is his claimed knowledge of mythical Amazonia, today, more than ever, a metaphor for the Battle of the Sexes.

Beside the land of Chaldea [southern Iraq] is a land of Amazonia, that is the land of Feminye [womanhood]. And in that realm is all women and no man; not, as some men say, that men may not live there, but for because that the women will not suffer no men amongst them to be their sovereigns.

Outside of Sub-Saharan Africa and the New World, there are few places he missed. With stays in Ethiopia, Persia, India, North and Central Asia, Siberia, China and lands to her East, presumably Japan and Korea, the Encyclopeadia Britannica called him the “greatest traveler of the Middle Ages.”

“Mandeville” on the road is the tallest tale. Scholars argue that he never left his writing desk. None assert that he traveled extensively, let alone thirty-four years. He drew literary inspiration from wayfarers ranging from Herodotus and Pliny to Marco Polo and wandering monks, especially Odoric of Pordenone. Despite his prevarications, nay because of them, his book sits firmly in the pantheon of travel literature.

How different is his hyperbole from today’s brochures and guidebooks promising great sex, great food and great wine, the priority varying with age?