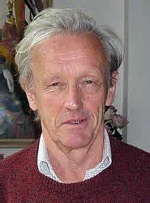 The Times of London recognized Mr. Thubron as 45th on their list of the “50 greatest writers since 1945”

On my map the Altun [Mts.] looked like nothing: a thin outcrop of the ranges shielding Tibet. But now they erupted to about eighteen thousand feet in sheets of inky rock. They made a fearful, sombre violence. All their intersecting ridges were picked out by snow, so that they engulfed us skyward in a chiaroscuro of blackly shining precipices. No shrub softened them. Soon we were running along five-hundred-foot chasms. As we ascended, they plunged and hacked their way into constricted valleys where nothing was, while high above them the mountains hung like wrecked stencils for hundreds of feet. The snow soon banked around us. It had fallen overnight, and lay virgin on our track. We all craned forward. Three times we clambered down to dig out the [Land] Cruiser, and once it slewed out of control altogether, landing at right angles to the verge two yards away. I went to the edge and stared down into nothing.

Traveling into the heart of China’s Xinjiang Province, Thubron enters the land of the Uighuers (“wee-gurs”), “a Muslim world, another nation” of Turkic people, “bigger, laxer, more varied” than the physical sameness of the Han, stereotypical Chinese, the country’s dominant ethnic group. Struggling for self-determination, the Uighurs “embrace ancestors long pre-dating China’s rule.”

Enigmatic mummies [of the Uighur’s forebearers] have surfaced all around the Taklamakan, some of them dressed in Celtic-looking tartans, others in witches’ hats. Around their origins, controversy rages. Out of a maze of linguistic and archeological data, they move against the great east-west tide of nomadic migration, and flow down in the third millennium BC out of the Siberian steppes, from the easternmost reaches of the Indo-European world.

The Silk Road is a “river where nations have lost their meaning.” The Road’s eponymous Chinese fabric was in such demand, so highly valued that merchants from the Mediterranean braved the Taklamakan’s “black hurricanes” that buried caravans in “sand dunes without a trace.” Many successfully making the journey stayed.  “DNA tests have linked western China by an indelible trail far to the Mediterranean. So who, exactly, was the restaurateur’s green-eyed wife clearing my plate?” Thubron asks. He writes of the Road’s history and vicissitudes, of fierce yearnings for independence, of the trade in jade between “Mesopotamia and China” – the Jade Road – paving the way for silk’s path, of a parade of cultures dominating the route – Zoroastrians, Buddhists, Christians, Hindus, Muslims – and of conquerors from Alexander the Great, the Mongol Khans (Genghis and his sons), and Tamerlane to Mao and Stalin. The Road is the story of peoples who have “infused it” – Chinese, Russians, Tartars, Germans, Turcoman and Iranian peoples, Tajiks, Uzbeks, Indians, Uighurs, Koreans and more. Over the centuries they come and go, ostensibly obedient to their rulers, faithful to their religions, seeking a better life, buying and selling, always buying and selling.

On March 26, 2011 Thubron gave a lecture at Univ. of Pennsylvania’s Penn Museum of Archaeology & Anthropology on “Traveling the Silk Road Today” (about 33 minutes on YouTube) – click here

See the playlist for NHK’s documentary about the Silk Road. Twelve episodes on YouTube, each about 48 mins. I have not seen all; but have viewed enough other NHK productions to know they are good, high quality, literate, informative and entertaining. Click here

Click here for a brief bio of Mr. Thubron, his books and awards.

In the “Silk Road Travel Blog” visitors describe their experience of various places along the route.