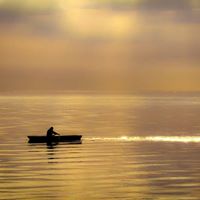 Daniel D’Arezzo left a comment in regard to my reading last week that mentioned Horacio Quiroga, a famous Uruguayan author. Daniel mentioned Quiroga among others (providing a counterpoint to the association of artists and suicide) but this is the one that caught my attention because he wrote a short story called Drifting which a colleague of mine at school is using as the basis for his thesis film which I am producing. Of course it is not really fortuitous that Quiroga seems to be following me, it is merely coincidental (similar to Daniel’s argument that suicide and artistic endeavors are not really linked)… but I do think it is part of the human condition to create connections and turn coincidence into something more meaningful.

The last line of the English translation for Quiroga’s Drifting is: “And he stopped breathing.” The short story (and Roee Messinger’s film based on the short story) is about the rather peaceful uneventful death of a man killed by a snake bate. In this story his death is not infused with excessive meaning or significance. Unlike the line in Flaubert’s Madame Bovary that states “she ceased to exist,” (or “Elle n’existe plus”) – which always seemed romantic to me. For, of course, even though she is no longer alive she continues to live on in Charles’ memory. Death is not so simple in Flaubert’s tale. Although perhaps both Quiroga’s and Flaubert’s version of death are equally romantic… Quiroga’s in its simplicity and Flaubert’s in its melodramatic tendencies.