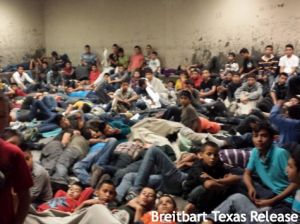 A series of images of young children in a crowded US Border Patrol facility in Texas has been circulating the web since they leaked into conservative news and opinion website Breibart.com last week. The images show hundreds of immigrants—most of them Salvadoran, Honduran and Guatemalan children and minors—shoved in windowless rooms as they await for instructions.

In an article featured in WLRN (We Learn) titled “How Central American Kids Gave Us A Reality Check,” Miami-based journalist Tim Padget reports on this issue by mocking the government’s failed plans for migration:

Both President Obama and his Republican opposition had been patting themselves on the back of late for making the 2,000-mile-long frontera between the United States and Mexico more forbidding for undocumented migrants. Fewer and fewer had been crossing each year, because of beefed-up border security and because Obama had made a policy of deporting indocumentados in record numbers.

And then a bunch of Central American kids had to spoil the celebration.

They had to give us a reality check – and remind us that no matter what we do on the border, or how many migrants we boot back south, those folks will come if they’re desperate enough. They will come. Period. Punto.

…[W]e need to realize that [this problem] has far less to do with the fences we build on the border than with the economies and institutions we help build at illegal immigration’s source.

The article is an obvious critique to the government’s limited focus on domestic policy. To counter this view, Padget presents a different narrative about these children. Rather than raising concerns about what to do with the children in the United States and how to represent and protect them, Padget focuses on the pressing concerns of foreign policy. The photograph he chose to illustrate his article points the same way. Instead of displaying the images of today’s crowded facilities in Texas, Padget features individual children in their journey across Central America, where they often encounter gang violence and police abuse.

It’s hard not to look at these images with contempt against some of the people making the decisions for these children. But Padget’s narrative raises another concern about the way we see children as innocent. Are these images disturbing because of the way they document children in unsanitary and/or risky conditions? Do they threaten our own perceptions about what childhood should be? Are they concerning because they portray innocent children exposed to abuse? If so, what happens to the child that we cease to see as innocent?

Central America,” suggests Mr. Padget, “is every child’s nightmare today. . . The monsters aren’t in their closets or under their beds; they’re on every street corner, school yard and public bus. Bloodthirsty, garishly tattooed narco-gangs known as the maras have overrun the region, especially in Honduras, which today has the world’s highest murder rate.

Images of children have always been used to mobilize people and advance specific political goals. In this case, it seems very clear what Mr. Padget’s goal is.

The title of this article was borrowed from the original caption of the featured image, which reads: Migration of the Innocents: a Central American toddler being lifted onto the Mexican train known as “The Beast” by Keith Dannemiller, from the International Organization for Migration. The title may or may not have been selected for its cultural references, but it certainly points out to two popular images: (1) The Home of the Innocents, an open arms center that, like many others, serve neglected children in Kentucky; (2) The Massacre of the Innocents, the biblical narrative of infanticide by Herod the Great.

For more individual-oriented images about immigrants’ journeys across the border see Keith Dannemiller’s series “Trains They Ride,” or scroll down to see my own selection. 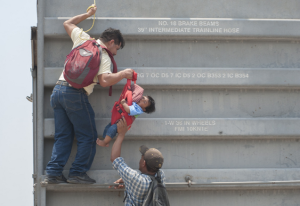