Last week I found myself, like many others, looking for quotes by Gabriel García Márquez to remember him after his death. Among the things I found is a brief text titled “Manual para ser niño” (an essay on children’s educational rights, El Tiempo, Bogotá, 9 October 1995). In it, the Colombian novelist seems to recognize children’s natural and healthy appetite for things they enjoy. Since I couldn’t find an English version of this essay, I will be sharing my very own home-made translation. For the original text in Spanish click here:

I hope these reflections become a manual for children to dare to defend themselves from adults as they learn arts and literature. My reflections don’t have a scientific basis, but an emotional or sentimental one, if you like. They rest upon an unlikely premise: if a child is presented with a series of different toys, she will chose the one she likes most. I happen to think such a preference is not casual, but that it reveals the vocation and skill of the child that perhaps will go unnoticed by her absent-minded parents and distracted teachers.

I believe both [skill and vocation] are given at birth, and it seems important that they get acknowledged in order to help the child choose a profession. Moreover: I believe some children of certain age and condition possess congenital faculties that allow them to see beyond the reality that has been admitted by adults. These could be the leftovers of some other prophetic power exhausted by humans in previous epochs, or extraordinary manifestations of the clairvoyant intuition of artists in solitary growth that disappear, like the thymus gland, when they are no longer needed.

The first lines are heartwarming. But I like to focus on the second part of the second paragraph. There, García Márquez shares an exotic vision of children by infusing them with congenital faculties that distinguish them from adults. Reading these lines makes me think that García Márquez, the master of realistic fiction, chose to move away from scientific reasoning. By using words like “prophetic powers” and “clairvoyant” he confers children’s nature to the extraordinary or supernatural. Personally, I think García Márquez’s argument could have been stronger if he would have simply acknowledged that children of certain age see things differently because they haven’t absorbed adults’ constructions about life. Perhaps then he would have found scientific proof about children’s intuition.

Gabriel García Márquez was awarded the Neustadt International Prize for Literature in 1972 and the 1982 Nobel Prize in Literature. He died of pneumonia at the age of 87 on 17 April 2014 in Mexico City. 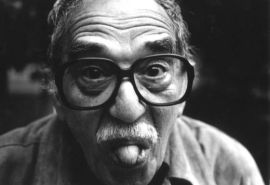 For an exploration of children’s lives between two worlds read Alexia’s article “Children Challenging Borders: The physical and psychological journeys that the children of immigrants make for their families.”