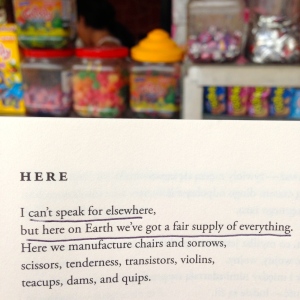 I owe a new-found obsession with off-road rallies to my husband’s passion for cars. Once our baby was born he exchanged the race track for the dirt track and brought me along. Last weekend we traversed more than 600 kilometers of Colombian wilderness on a dirt buggy.

Because road trips are better taken in good company, I took Polish poet Wisława Szymborska-Włodek along for the ride.  Of course, since the former Nobel Laureate is sadly no longer with us, I had to settle for her magical collection of poems titled “Here.” I’ll be posting several of the pictures I took of her poems during our trip in the next coming weeks.

Below is the poetry collection’s namesake poem. The accompanying photo was taken at a storefront in a town called Mani, which, for a very far-removed place, indeed had a fair supply of everything.

I don’t know about other places,
but here on Earth got a fair supply of everything.
Here we manufacture chairs and sorrows,
scissors, tenderness, transistors, violins,
teacups, dams, quips.

Maybe somewhere else there is more of everything,
only for some reason there are no paintings there,
cathode-ray tubes, dumplings, tissues for tears.

There are plenty of places here with surroundings.
Some you can particularly get to like,
name them your own way
and protect them from evil.

Maybe somewhere else there are similar places,
But no one considers them beautiful.

Maybe like nowhere else, or in few other places,
here you have your own body trunk,
and with it the tools needed,
to add your children to those of others.
Besides that your hands, legs, and the amazed head.

I know, I know what you’re thinking.
Nothing is permanent here,
for since ever forever in the power of the elements.
But notice—the elements get easily tired
and sometimes they have to take a long rest
before the next time.

And I know what else you’re thinking.
Wars, wars, wars.
But even between them there happen to be breaks.
Attention—people are evil.
At ease—people are good.
At attention we produce wastelands.
At ease by the sweat of our brows we build houses
and quickly live in them.

Life on earth turns out quite cheap.
For dreams for instance you don’t pay a penny.
For illusions—only when they’re lost.
For owning a body—only with the body.

And as if this was not enough,
you spin without a ticket in the carousel of the planets,
and along with it, dodging the fare, in the blizzard of galaxies,
through eras so astounding,
that nothing here on Earth can even twitch on time.

For take a good look:
the table stands where it stood,
on the table the paper, exactly as placed,
through the window ajar just a waft of the air,
and in the walls no terrifying cracks,
through which you could be blown out to nowhere.