I think the Metropolitan Museum of Art missed an opportunity to challenge modern constructions of childhood by naming its solo exhibition on Balthus Cats and Girls: Paintings and Provocations. Cats were, indeed, a big part of the painter’s persona. But I would never say that Balthus’s works are deep and wonderful and mysterious because of the cats. In fact, cats seem to appear merely in about a third of the exhibition’s oil-and-color paintings. But perhaps the musem had it’s own strategical reasons to appeal to cat lovers. Either way, please visit the show. The Digital Journal explains that Balthus’s paintings

Perhaps one of the reasons why I enjoyed Cats and Girls most is because it portrays children as both, powerful and powerless. As I strolled through the exhibition’s colorful rooms, Jenny Kitzinger’s  more aggressive) article “Who Are You Kidding? Children, Power, and the Struggle Against Sex Abuse” [published in A. James & A. Prout’s book Constructing and Reconstructing Childhood (London: Falmer Press, 1990)] resonated in my mind. Kitzinger criticizes people’s tendency to describe childhood as an innocent time and space for at least two reasons:

In painting children in adult-like situations, was Balthus aware of these constructions? Did he mean to challenge people’s perceptions of childhood and innocence, or to reinforce them?

“Scraps”
What do you think when you see my smile?
The nose of the father that left you with a child?
Or is it my brown eyes that will never be yours?
Is that the reason I’ve been feeding off scraps of love ever since you left?
Looking for a place to starve off my hunger that you never fed?
Walking on thin ice that should have been yours? But
you left me then, forgetting in that hospital room that –
the only person I came from is you and –
non-stop talk about it if you didn’t do that before –
I wouldn’t have been born into this situation
where I have nothing to lose, ’cause –
I’m always feeding on scraps of love at the dining room table.

But see, I’m older. Don’t act like I never told you that we’re over.
I don’t wait by my bedside hoping for a kiss.
I don’t roll over in bed because I never got my wish.
I don’t pretend to my friends that my mother loves me more.
I just wonder what it would be like to have a dad – without the ruckus and the scraps.
I just don’t want to have to ask: Mom, can I please not be my father?

I have come to believe that creativity has more to do with experience than with spontaneity. According to The Creativity Post (see “At What Age Will Your Creativity Peak?“) researchers distinguish between two main types of creative thinkers, experimental artists and conceptual artists. Not surprisingly, I think I might fit category number two best:

Artists motivated by experimentation – Paul Cézanne for example – have imprecise goals and are driven by visual perceptions. These experimental artists tend to paint the same thing many times, rarely make preparatory sketches, and “aim to discover the image in the course of making it.” Their work is gradual and they learn as they paint, improving over time as an artist. The experimental artist is often at their creative peak much older. Cézanne did not paint what is considered one of his most important works, Les Grandes Baigneuses until he was well into his sixties and at the end of his days.

Conceptual artists, like Pablo Picasso, are driven to communicate precise concepts, ideas, or emotions. They often make detailed sketches to prepare for the work and their ideas are frequently sudden. Galenson explains further that, “Unlike experimental artists, whose inability to achieve their vague goals can tie them to a single problem for a whole career, the conceptual artist’s ability to consider a problem solved can free him to pursue new goals.” The peak for conceptual artists is much younger. Picasso painted Les Demoiselles d’Avignon after dozens of preparatory sketches, finally starting to paint when he was merely twenty-five.

Anthropologists George and Louise Spindler admit to having fallen ill, been cold, wet, and insect bitten, suffered from having to struggle along in someone else’s language, been rejected by the very people they wanted to know, harassed by children when they want to work with their elders, but, nevertheless, proudly report that “we have never had a truly bad time in the field.”

Ethnographers must learn to recall observed scenes like a reporter, to remember dialogue and movement like an actor, to see colors and shapes like a painter, and to sense moods, rhythms and tone of voice like a poet.

Kitzinger warned that we cannot analyze childhood without looking into parenthood. Margaret K. Nelson follows this road in her book Parenting Out of Control: Anxious Parents in Uncertain Times (New York University Press, 2010.) Nelson identifies a relationship between what she calls parents’ “Delayed Launching” of their children into adulthood and children’s “Delayed Maturity.” The consequence is often a prolonged adolescence, which is more visible among professional middle-class families. An article published by The Hedgehog Review titled “Holding them closer” (Vol. 15, No. 3) illustrates this better:

Parents have always sought to nurture and protect, but our study reveals a particularly strong desire to cushion children’s falls, protect them from danger, and preserve their social dignity. Four out of five (80 percent) of today’s parents, for example, say that children are very vulnerable and must be protected. Their greatest fears are that their children might be snatched away, preyed upon sexually by other adults, or injured in a serious accident. Even though such risks cannot be completely removed, parents’ strategies for minimizing them focus on keeping their children close at hand or monitoring their activities when they are away.

Last morning Jeff Spurgeon (New York’s WQXR radio station morning host) promoted the Met’s exhibition on Balthus by calling it an illustration of “the dark side of childhood.” I’ll finish this week of reading with my favorite quote—and painting—from the show:

Balthus’s children play only card games. The confident look on this girl’s face indicates that she is winning—or thinks she is. 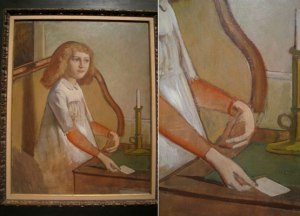