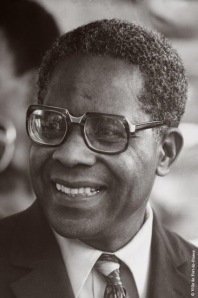 I’m reading way too much right now, if that’s even possible, and it’s all rather intense. I just finished Aimé Césaire’s Discourse on Colonialism (1955). His harsh criticism of colonialism’s poetic nature serves to further emphasize the emotional impact of his subject matter as he notes that in order for the colonizer to “civilize” the colonized, he must transform himself.

…. They prove that colonization, I repeat, dehumanizes even the most civilized man; that colonial activity, colonial enterprise, colonial conquest, which is based on contempt for the native and justified by that contempt, inevitably tends to change him who undertakes it; that the colonizer, who in order to ease his conscience gets into the habit of seeing the other man as an animal, accustoms himself to treating him like an animal, and tends objectively to transform himself into an animal. It is this result, this boomerang effect of colonization that I wanted to point out.

If only I could read it en francais.

I. RUN OF QUESTIONS
If not in the scarf-skin, where does it “reside”? Do objects have business
ends? In our parade clothes, shall we go to business, only?
Or, doesn’t the whole thing transact? What is “repair”?

And how to account for the frission between us, which, previously, I could not
imagine?

Reading more poetry. This time it’s Allen Ginsberg. He was political, true. He was also many other things. Though his poem “Song” could easily be read as political, perhaps it’s because I was listening to Duke Ellington and John Coltrane last night, that I’m in a sentimental mood. So tonight, I’m just going to read it as a poem about love. Supreme.

the weight,
the weight we carry
is love.

Who can deny?
In dreams
it touches
the body,
in thought
constructs
a miracle,
in imagination
anguishes
till born
in human–
looks out of the heart
burning with purity–
for the burden of life
is love,

No rest
without love,
no sleep
without dreams
of love–
be mad or chill
obsessed with angels
or machines,
the final wish
is love
–cannot be bitter,
cannot deny,
cannot withhold
if denied:

the weight is too heavy
–must give
for no return
as thought
is given
in solitude
in all the excellence
of its excess.

The warm bodies
shine together
in the darkness,
the hand moves
to the center
of the flesh,
the skin trembles
in happiness
and the soul comes
joyful to the eye–