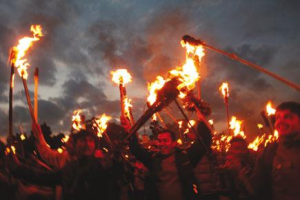 The People’s Movement in Nepal

Every day, hundreds of European, American, Australian, and Israeli tourists walk the streets of Thamel, downtown Kathmandu. Nearby is the Narayanhiti Palace Museum, the Nepali Royal Palace that was converted into a museum after the Nepali People’s Movement of 2006 (in Nepalese, Jana Andolan II). Most of these tourists are unaware that the crowded, winding streets of Thamel were much more crowded in April 2006—filled, in fact, with millions of stone and torch-wielding Nepalis battling and defeating the automatic-rifle bearing Royal Nepal Army.

In South Asian villages, party affiliation is primarily caste-based. In general, an entire village associates with one political party. In peacetime, village elders and caste leaders decide party affiliation in typical patrician fashion, according to whichever party has done most for the village. During civil wars, villages are simply affiliated with the army that controls the territory. Caste-based politics stimulates little dialog between citizens and is certainly not driven by ideology. Even if one happened upon propaganda, could read it, and was swayed by the arguments, to espouse an opposing political belief would be anathema to the entire caste order. None of this is incredibly different from politics in the United States, where the average citizen can read, but seldom does, generally doesn’t read ideologically driven political pamphlets, and is generally ostracized to the degree that his or her political beliefs differ from that of his or her community. The main difference between rural South Asia and urban United States is the ease with which citizens of the US can leave one community and adopt another one.

One of the greatest fantasies propagated by the Maoists is that Jana Andolan II was not as important as the 1996–2006 Maoist People’s War in the overthrow of the Nepali Shah dynasty. Not to be outdone, the non-Maoist political parties propagate fictions in which Jana Andolan II was just as antiwar, and therefore anti-Maoist, as it was anti-monarchy. My goal is to help detail the dynamic between the people of Nepal—urbanites, villagers, political parties, armies, monarchies, classes, castes—and both their geographical and political neighbors, India and China, and the United Kingdom and the United States. Using historical documents, as well as conversations I had during the three months I lived in Nepal in 2008 and 2009, I will show why, without one another, neither the rural Maoist insurgency nor the urban Nepali People’s Movement would likely have overthrown the Nepali Shah Dynasty—the last Hindu monarchy in the world.

Picture is of a Neapli torch rally accessed in November 2012 from openthemagazine.com.